Western Australia based explorer, Pacifico Minerals Limited (ASX: PMY) is advancing well on its exploration activities at 75% owned Sorby Hills Lead-Silver-Zinc Project. In a significant update on 9 September 2020, the Company confirmed that the drilling program is currently underway at Sorby Hills Project.

Following the key update, PMY shares settled the day’s trade at $0.020 on 9 September. Notably, PMY share price has increased by over 216% in the past three months.

Further PFS Details Can Be Read At: Pacifico Minerals Sitting on a Sweet Spot with Outstanding Economic Outcomes from Sorby Hills Pre-Feasibility Study

The current drilling program encourages the advancement of the project toward a Definitive Feasibility Study (DFS). At the same time, it also explores opportunities to expand the resource base.

Silver has industrial applications, particularly in emerging green industries and plays a pivotal role in the production of solar cells. Meanwhile, lead batteries with unrivalled sustainability credentials have significant usage in electric vehicles and electrification of bikes.

The ongoing drilling program at Sorby Hills will incorporate a total of 68 drill holes for 5,200m. The drilling will be undertaken using a combination of mud-rotary collars and HQ3 diamond core. Pacifico indicated that depending upon the positive results during the implementation; the program would be expanded.

Commenting on the ongoing drilling, Managing Director, Simon Noon stated that the Company is excited to commence directly to a DFS, which is supported by the current drilling program. Citing the success of the 2019-20 drilling program, he indicated that Pacifico holds a track record of increasing resources, with the Company’s 2019-2020 drilling program witnessing substantial increase to the Sorby Hills MRE, which further underpinned the recent Sorby Hills PFS.

He indicated that with the commencement of the drilling, the Company now looks forward to updating the market with its progress and success with expanding Pacifico’s Resources. 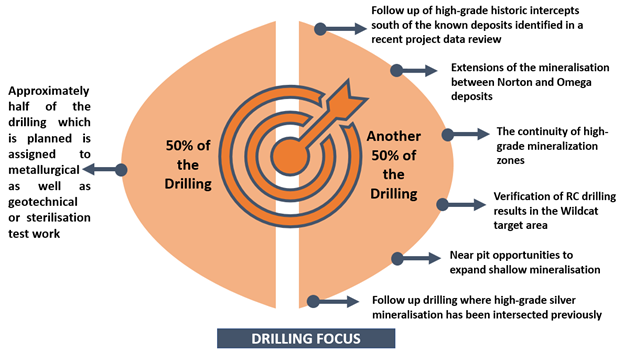 The study indicated strong pre-tax economics delivered by the project, that can be brought into production for an estimated $183M of the pre-production expenditure.

The anticipated average annual production from the project includes 81 thousand dry tonnes of 62% Lead-Silver Concentrate, consisting of 1.5Moz recovered silver and 50kt of recovered lead per annum across an initial ten years mine life. Besides, low C1 cash costs position of US$0.40/lb payable Pb delivers an LoM operating margin of 40%.

Pacifico Minerals has planned a first path assessment of its 100% owned Eight Mile Creek (E80/5317) tenement. The E80/5317 tenement covers 217 km2 to the northeast of Kununurra and south of the Sorby Hills Project. It adds 30 km of strike length of prospective exploration ground adjacent to the Sorby Hills deposit.