Estrella Resources Limited (ASX:ESR) ballooned on the exchange post announcing a significant nickel sulphide discovery at Carr Boyd on 8 October 2020. The stock skyrocketed from $0.014 to $0.094, that is, up 6.7x post the news was announced on ASX. However, the stock has cooled down in today's trade due to profit booking and closed at $0.064.

On 8 October, the Company notified the drill hole identified as CBDD030 that was drilled 300m south of the original T5 discovery zone intersected a massive nickel-copper bearing sulphide at the flagship Carr Boyd Project. 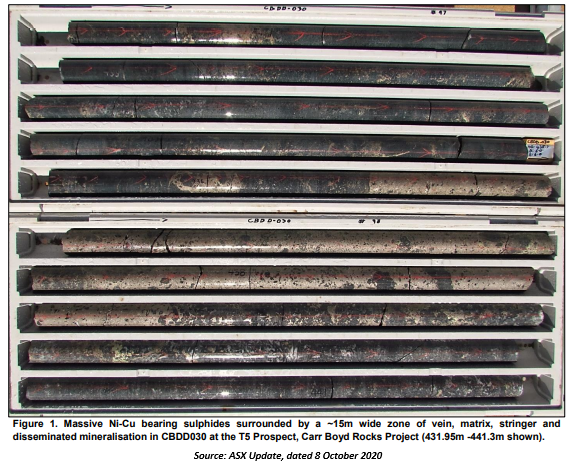 At present, ESR awaits laboratory analytical results which the Company would disclose once received.

So far, the miner has successfully drilled three holes, namely CBDD028, CBDD0029, and CBDD0030. The fourth drill hole – CBDD0031, that is collared 300m north of the T5 zone and giving deep coverage over a 600m wide window along the intrusions basal contact is currently progressing.

Furthermore, a DHTEM geophysical surveying is scheduled to further define the extent of this massive sulphide system. ESR has already completed a DHTEM survey at drill holes CBDD028 & CBDD029, which along with the pending completion of the final planned hole CBDD031 would allow the miner to vector into the extents and source of the identified primary magmatic nickel-copper sulphide mineralisation.

The current developments and results are a significant breakthrough in the development of the T5 Prospect at Carr Boyd. Moreover, the miner now plans to rapidly extend the exploration program at the flagship project, including upgrading support infrastructure, increasing number of drilling rigs, and personnel and support.

The market seems to be liking the recent progress of the miner around its flagship Carr Boyd Project with the stock of the Company increasing over fourfold in price post the announcement.