The companies in the utilities sector are generally involved in water, electricity, and gas distribution, generation, and infrastructure. The defensive sector usually remains unscathed in times of uncertainty due to the nature of the services it provides.

While demand for electricity and water for commercial purposes took a hit during the lockdown phase, the household demand went up with a higher number of people working from home during the period. With easing restrictions post-April 2020, utility companies witnessed a recovery in demand, and for some players, it even reached 2019 levels. The government also played its part in ensuring that supply of electricity, gas, and water, was not affected during the lockdown phase.

GOOD READ: Is there Resilience in the Utilities Sector?

On 20 July, the Company announced the completion of 19.99% stake sale in TransGrid to Canada’s Ontario Municipal Employees Retirement System (OMERS). Spark added that the transaction acknowledges the high-quality business as well as the value creation opportunities in TransGrid, specifically the broad pipeline of growth projects evolving from the Integrated System Plan.

Earlier in May, amid the COVID-19 crisis, SKI highlighted that energy demand in the National Electricity Market (NEM) witnessed a decline, with March figures indicating a reduction of 6.6% in NSW, 6.8% in Victoria and 11.1% in South Australia. For FY20, SKI expects to pay a distribution of 13.5 cps (minimum), comprising 7.0 cps for 1H and at least 6.5cps for 2H, depending on the business conditions.

AusNet Services Limited is engaged in the transmission and distribution of electricity. AST is also involved in the distribution of gas. Recently, the Company appointed Ms Naomi Kelly as Executive General Manager Governance and General Counsel, which will be effective on 29 July 2020.

During FY20, the Company delivered underlying cost savings amounting to $17 million. AST’s sale of inventory at book value stood at $13 million because of the expansion of electricity distribution operations and maintenance services contract with Downer EDI. Total dividend for FY20 stood at 10.20 cents per share, reflecting a rise of 5%. 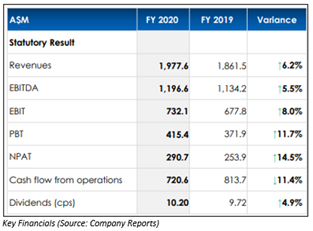 Mercury NZ Limited is involved in the generation and retailing of electricity.

During Q4 FY20, the Company returned normal operations post the COVID-19-induced lockdown, with office-based staff getting back and construction resuming at the Turitea wind farm. During the quarter, the Company’s hydro generation went down to 727GWh from 796GWh in Q4 FY19 due to exceptionally dry hydrology with Q4 FY20 Waikato catchment inflows at the 1st percentile.

The Company added that the demand in the quarter decreased by 4.2% on a temperature-adjusted basis because of the COVID19 lockdown. National demand was 14% lower as compared to the pcp in April, when activity restrictions were most severe but returned to similar levels to the pcp in May and June as lockdown restrictions eased.

DO READ: Growth and Dividend Story of Major Utility Players

Recently, Standard & Poor’s Global Ratings has revised its credit rating outlook to BBB+/Negative from BBB+/Stable. This indicates the risk of a challenging operating environment for the two to three years post the closure of Rio Tinto’s New Zealand Aluminum Smelter on 31 August 2021.

Regarding Clutha to Upper Waitaki Lines Project, Meridian Energy stated that tower foundation design work has been completed. In June 2020, Transpower announced that it would restart work to complete the remaining tasks. In the first 11 days of June, national hydro storage went down from 103% to 80% of the historical average and the Company’s May 2020 monthly total inflows were 90% of the historical average.

During 1H FY20, CEN reported a statutory profit amounting to $59 million, a fall of $217 million as compared to the prior corresponding period which included Rockgas profit of $10 million and the $172 million gain on sale of both Rockgas and Ahuroa gas storage. Operating free cash flow for the period stood at $120 million, with a fall of 39% due to a combination of lower operating earnings (EBITDAF), partially offset by a lower stay in business capital expenditure and interest costs.