Following the mobilisation of the drill rig at the Tucklan prospect, Gold explorer and developer, Sultan Resources Ltd (ASX:SLZ) announced that the drilling campaign has commenced at the wholly-owned project in the east Lachlan fold belt of New South Wales.

As reported earlier, SLZ plans to undertake a maiden drilling campaign, aggregating to 3,800 metres of Reverse Circulation (RC) drilling at over 12 holes with possible diamond tails. The initial phase of the drilling program is anticipated to be completed in 20 days.

Tucklan is a large epithermal gold and gold-copper porphyry target with exceptional groundwork and IP results. The maiden drill program at Tucklan is SLZ’s first in the east Lachlan fold belt. The commencement of the drilling marks the beginning of an exciting period at the LFB project, where Sultan continues to progress towards drilling on the copper-gold targets at Big Hill deposit. 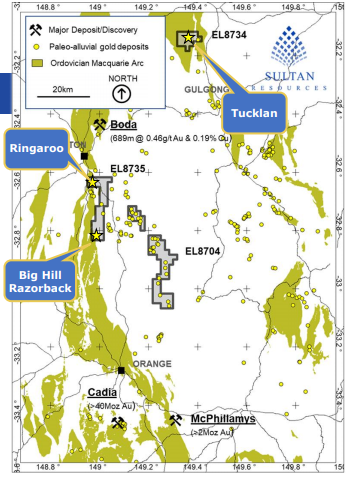 Sultan in the Lachlan Fold Belt

Sultan had acquired 100% interest in a suite of gold and copper exploration tenements from Colossus Metals in Central New South Wales. SLZ has continued the activities at the exploration assets with detailed mapping and sampling at the Tucklan, Ringaroo, and the Big Hill porphyry/epithermal targets.