Is this the Hottest Gold stock on ASX?

The great gold rally of 2020 had outshined almost all asset classes to surge to the all-time highs exceeding US$2,000 an ounce mark. The safe haven commodity proved its worth during one of the devastating economic slowdowns in the past century.

At a time, when the demand of almost all commodities slumped cataclysmically on the onset of the coronavirus pandemic, gold rallied as investors switched to the yellow metal to safeguard their principals and earn significant returns on it.

The gold prices have been consolidating in the past few months and now trades at US$1,704.9 an ounce on 30 March 2021 at 6:16 Pm AEDT. As per the Resources and Energy quarterly update, Australia holds the largest reserves of gold globally and it targets to emerge as the largest gold producer in 2021.

Following the trail of gold rally, many ASX-listed gold stocks rocketed on the bourses, delivering sharp returns. However, De Grey Mining Limited (ASX:DEG) has outperformed them all! 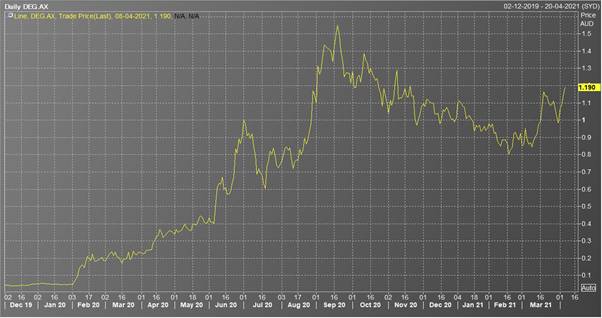 FMG has delivered total returns of 33 per cent on a MTD basis (as on 9 April 2021), delivering an alpha over its peers ND ASX 200. The gold stock easily outperforms almost all gold stocks trading on the ASX crowning it as the hottest gold stock on the bourses.

A Gold ace in the making

The next big gold discovery at Hemi: While the gold players rejoiced the unprecedented rally in the gold prices, De Grey mining discovered the Hemi gold discovery in December 2019. Ever since, the exploration success at Hemi deposit have reflected in the share price growth of over 2,700% since the news hit the exchange.

De Grey mining owns the Mallina gold project that encompasses over 1,200 sq kms of continuous tenement package. The company enjoys a dominant position in the prolific Mallina Basin of the Pilbara region.

Hemi and Antwerp discoveries - In December 2019, DEG discovered strong gold mineralised intercepts during the shallow widespaced aircore drilling campaign at the Hemi prospect. Some of the best intersections included -

In times when the grade decline has been a critical issue in the operating gold mines and only very few gold projects exhibit the potential of a major discovery with such high gold grades, Hemi has been realised as an important milestone for the exploration company. The major discovery has been the trigger of the massive upsurge in DEG’s shares prices.

Following the discovery, the exploration company has utilised 8 drill rigs and have conducted over 285,000m of drilling at the Parks Reef project. The au courant audience must know that Mallina basin is one of the earliest mined gold mining sites in Australia.

Throughout 2020, De Grey continued to advance on the Mallina gold project and made significant discovery at Aquila and Falcon prospects. Most recently in January, the gold discoveries at Eagle and Diucon prospects were announced.

De Grey realises the potential for gold mine development at Hemi and other regional prospects and plans to further fast track the exploration and development activities at the Mallina gold project. Hemi prospect continues to remain the drilling focus and holds potential for new zones.

De Grey considers that over 200 km of shear zones can be explored to expand the existing shear hosted mineral resource at the gold project.

The following activities have been planned for 2021 -

Hemi – The gold payers plan a RC/diamond drilling campaign to extend the mineralised footprint and will also test the extension of mineralisation at depth. DEG plans to estimate the maiden mineral resource at Hemi by mid-2021.

Greater Hemi – DEG will continue the aircore drilling campaigns at the intrusive targets.

Regional – An aircore drilling program has been planned at the Charity Well, Calvert, Geemas and other prospects to test the regional intrusions.

Development: DEG has planned to conduct an extensive metallurgical test program to identify the favorable processing options. Further, the mining, processing and heritage surveys have also been planned for the gold project.

Gold prices have been consolidating recently as the markets are now back to risk on mode. Investors should be cognisant of the underlying commodity trend while studying commodity companies such as gold stocks.