The shares of Heavy Mineral Sands (HMS) explorer MRG Metals Limited (ASX:MRQ) were trading up by 5% on the ASX at AUD 0.010 (3:56 PM AEST). The upsurge can be attributed the Company adding a further string to its bow in terms of exploration upside.

MRG Metals has received encouraging results from ongoing mineralogical studies at Corridor South exploration license and interpretive work conducted on the new and historic mineralogical information. At a time when the explorer is moving towards defining three separate Mineral Resource Estimates (MRE) across its Corridor portfolio, these results are “encouraging and very exciting”, says Chairman Mr Andrew Van Der Zwan.

A mineral assemblage study at the Nhacutse deposit, along with interpretation of previous mineralogy data has confirmed a substantial increase in the VHM content of the HMC from west to east within the Nhacutse resource area.

The study also confirmed previously reported exploration data. It assures the presence of a north-south trending very high VHM domain extending down the eastern side of the Corridor South tenement. 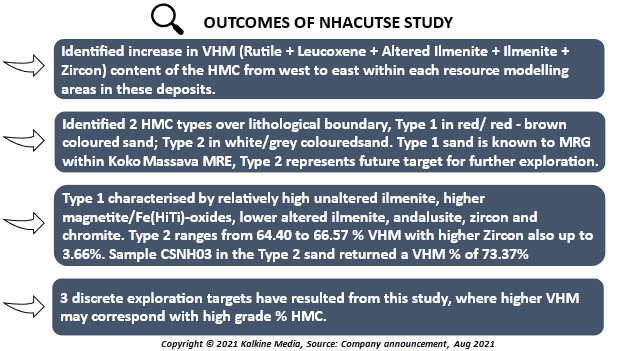 The recent mineralogical studies within Corridor South (6621L) involved eight composite samples from 4 aircore holes drilled in the Nhacutse deposit area. It is now known that there is potential in the eastern area for supplying high % VHM material in close proximity to the Nhacutse and Poiombo High Grade Zones. 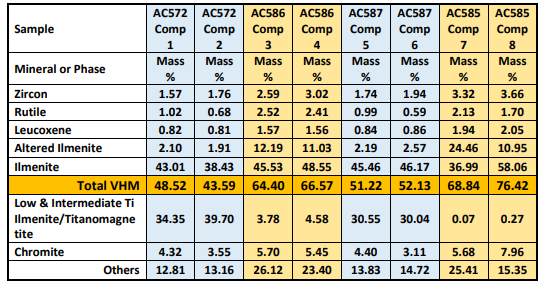 Much higher VHM % was found in the white / grey sand areas / lithology in the east of the Corridor South license versus the red/red-brown sand lithology. There is gradual but clear increase in VHM% towards the south (Zulene deposit) of the license as well.

Through the findings of the mineralogical studies and possibly higher value assemblage composition, new targets can be generated wherein the high value and / grade VHM meets areas with higher THM grades.

Two areas towards the northeast of Corridor South, to the east of the Nhacutse and Poiombo deposits as well as in the Zulene deposit area, appear to be the best targets for additional exploration drilling. 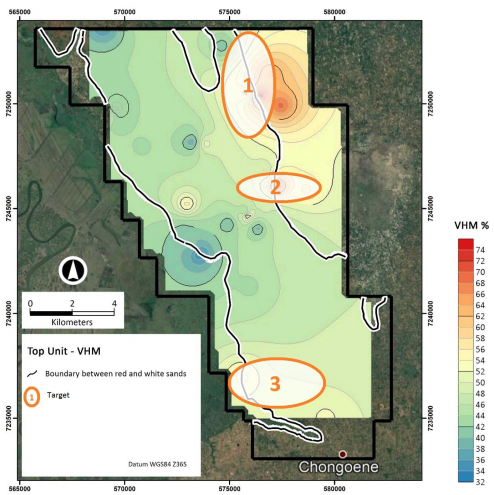 Meanwhile, drilling has been halted while the Company awaits lab assays to undertake MREs on the very high grade Koko Massava, Nhacutse and Poiombo. Reconnaissance auger drilling will begin in the eastern domain to find areas with high THM grade and the very high VHM content.