Torrens Mining Limited (ASX:TRN) has been riding high on the back of an exciting update on its joint venture asset with Coda Minerals (ASX:COD) – the Elizabeth Creek Copper Project in South Australia.

TRN holds a 30% interest in the Elizabeth Creek Copper Project, subject to a farm-in agreement with COD, which has a 70% interest in the project and has an option to acquire a further 5% stake for AU$1.5 million.

Eight deep holes have been completed so far under the Emmie Bluff drilling campaign. Earlier, parent hole DD21EB0018 hit 35m of mineralisation grading in excess of 1% copper with peak grades of 5.39% Cu within the higher grade bornite zones and 1.19g/t Au in the main chalcopyrite zone. 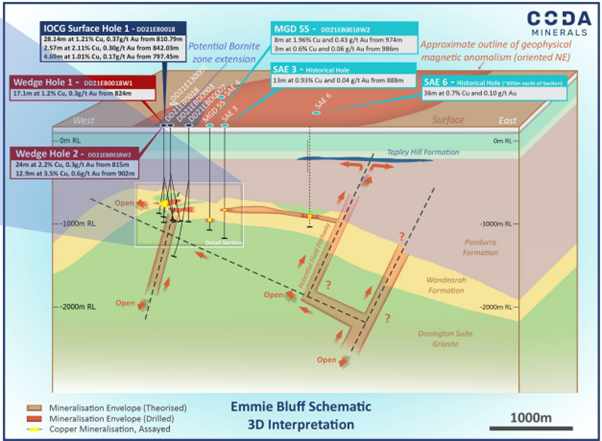 Now, the JV partners have intersected IOCG-style mineralisation of varying thickness and tenor over a major area. The mineralisation was identified as part of visual logging of copper-bearing sulphides, supported by hand-held XRF.

The latest drilling has indicated the existence of mineralisation throughout an area of at least 300m east-west by 200m north-south.

Currently, the mineralisation remains open in all directions except directly to the north of DD21EB0018. Historical drill results offer strong evidence for the occurrence of lateral extension beyond the bounds of recent drilling, possibly as far as 800m to historical drillhole SAE 4 or beyond.

Hole DD21EBD0003W2 has delivered some of the most encouraging intersections within the last few days. Notably, the hole has encountered around approximately 67m of mineralisation over two vertically stacked lodes, including the following: 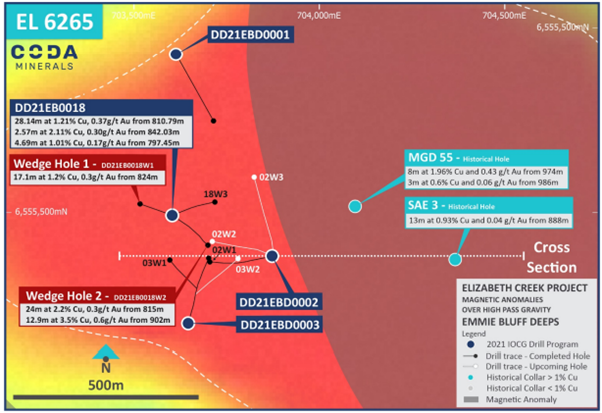 Additional encouraging results seen in other holes are as follows:

Currently, the partners are engaged in aggressively following up on these results with two further wedge holes designed to intersect the copper-rich bornite core zone.

The latest data from visual logging of core from the continuing Emmie Bluff drilling program has substantially enhanced the JV partners’ confidence in Emmie Bluff Deeps.

The ongoing work is aimed at extending the copper-rich bornite zones and further testing areas for vertical extension and additional stacked lodes.

All eyes remain on further results from the ongoing drilling at the project area.