Podium Minerals Limited (ASX:POD) in an upbeat market update shared its plan to drill two-750m hole diamond drill holes to test the continuity of the mineralisation at depth at the Parks Reef project.

The diamond drilling program will test the extent and continuity of mineralisation at depth more than 500m beneath the surface. It will be co-funded by the Western Australian Government’s Exploration Incentive Scheme (EIS). The application to the state government for the EIS grant has been accepted.

The drilling campaign would be a significant milestone at Parks Reef given that the deepest drilling so far at the project has tested depth less than half of the proposed drill hole, which will drill up to 520m. The campaign follows the recent successful drilling programs, which have identified high-grade mineralisation of not only platinum and palladium but also rhodium and iridium.

The co-founding forms part of Round 23 of the EIS and $150K has been granted to Podium, which equates to roughly the 50% of the expected cost of the drilling program. Further, an additional third deep hole is also under consideration and will be outside of the EIS program.

Must Read: Podium Minerals’ high-grade PGM intersections up to 25.74 3E PGM at Parks Reef set the stage for resource upgrade 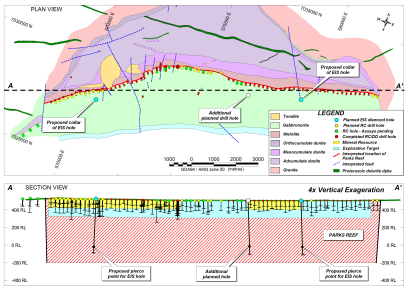 The deep drilling program plans to –

The drilling program is anticipated to commence in July and will take up to a month to complete.

Currently, the Parks Reef project holds an inferred resource base of over 1.39 million ounces of 3PGM along with copper resources of over 53,900 tonnes on 8.5 km of the known PGM mineralised strike length of 15km and up to 100m from the surface.

The additional drilling campaign at the Parks Reef project is already underway to define the continuity of the high-grade PGM mineralisation. The outcomes of the ongoing program will be included in the mineral resource upgrade, which is anticipated to be completed in late May or early June.