Following the significant announcement, MGV stock marked an uptick of over 9 per cent from the previous close, traded at AUD 0.36 on 8 April 2021.

Drilling linked Target 5 and Target 20 to define the Big Sky prospect, located ~3.5 kilometres south of Break of Day. The gold mineralisation remains open to the north, south as well as down dip.

The southern end of a well mineralised gold corridor defines regolith intercepts. It has a potential strike extent of more than seven kilometres and is predominantly not drilled in basement bedrock.

Aircore drilling is advancing well with the aim to define the extent of the regolith gold mineralisation. The new intersections from six metres composite samples at Big Sky include:

Aircore drill holes have a spacing of 40-80 metres and are drilled along spaced traverse lines of 40 metres to 160 metres. The potential of Big Sky Prospect to increase Musgrave’s existing resource base is supported by its extensive nature and gold mineralisation continuity. Musgrave has scheduled follow-up RC drilling next week, which would define gold mineralisation extent in the basement rock. The subsequent resource definition drilling would be contingent upon the accomplishment of the RC drilling program.

Significant outcomes from RC holes were returned from individual one-metre resamples of six-metre composite samples, with several holes terminating in mineralisation. Below are the results:

Further aircore drilling is presently in progress, and a further RC drill rig is slated to kickstart next week to follow up on the results. 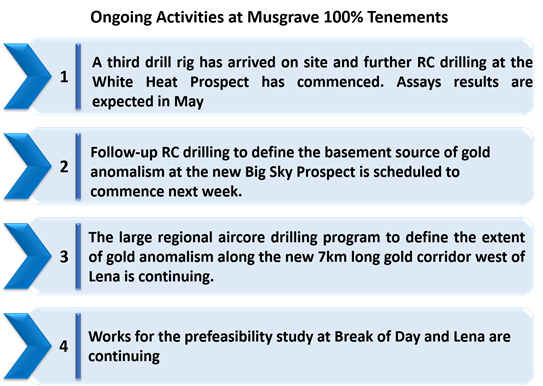