Drilling at the polymetallic Nxuu deposit

The Company couriered around 6.6kg of 1/2 HQ diamond core from three holes drilled into the Kihabe Deposit (2017) to the University of Tasmania.

The drill core was selected from intersections within the oxide zone of the Kihabe Deposit. The mineralogical test work would be undertaken on the drill core to determine the host mineral for Germanium (Ge). The test work highlighted the potential association of Germanium with iron hydroxides, requiring specialised test work to be undertaken by the University of Tasmania. 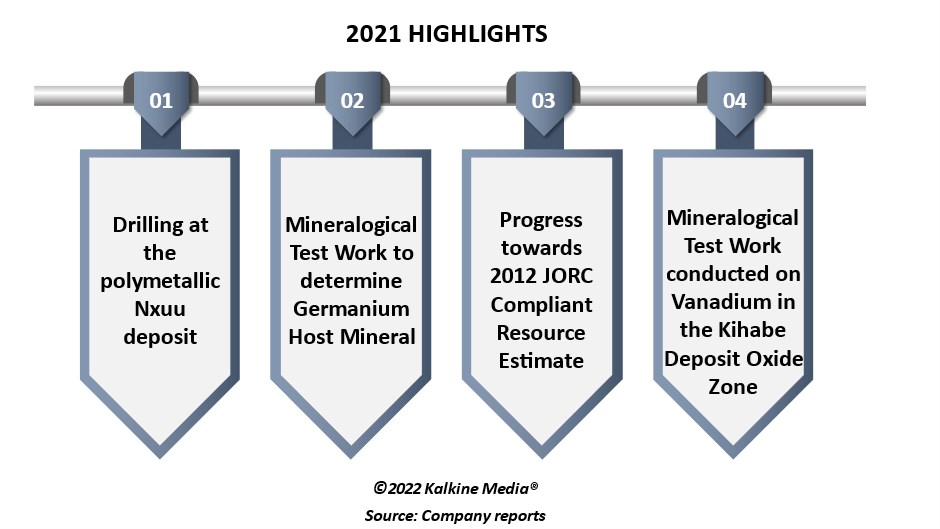 The Company was able to identify the overall mineralised domain of the Nxuu Deposit and estimate depths to the base of mineralisation through the detailed assessment of geochemical soil sampling and data. The Company also anticipates that it would be able to estimate an Indicated/Measured resource compliant with the 2012 JORC Code and conduct confirmatory metallurgical test work, leading to a Pre-feasibility study

During the June quarter, the mineralogical test work results from ALS Laboratories and Naples University confirmed vanadium oxide Descloizite to be the host mineral for Vanadium in the Kihabe Deposit oxide zone. It has enabled the Company to highlight the V2O5 grades associated with the separate Zinc, Lead, Silver and Copper grades.

All in all, Mount Burgess undertook a flurry of development initiatives including an in-depth review of silver and copper domains of the Kihabe deposit. These undertakings would remain significant, fostering path for further project development in 2022.