Shares of Jindalee Resources Limited (ASX:JRL) traded 17.272 per cent higher at $1.935 on 22 February 2021 following the release of encouraging metallurgical results from the McDermitt project. 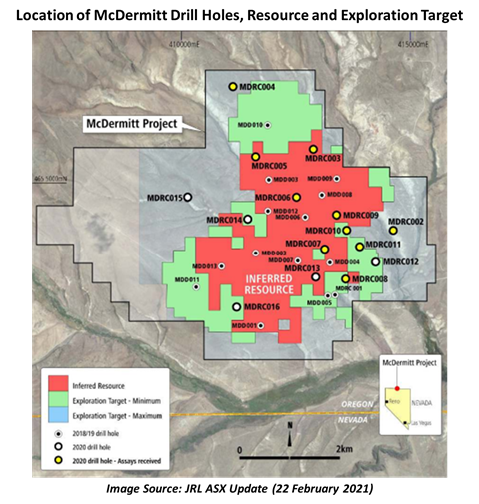 In July 2019, Jindalee unveiled results from leach testwork conducted on bulk (non-beneficiated) samples from McDermitt. The outcomes indicated lithium recoveries of over 95 per cent with short residence times using H2SO4 (sulphuric acid) leach at moderate atmospheric pressure and temperatures, with the potential to lower acid consumption through recycling of the leachate.

Subsequently, the Company announced further positive metallurgical testwork results from the McDermitt project in August 2020. The Company informed that beneficiation of McDermitt ore through attrition scrubbing at 20 per cent solids had reduced analcime and carbonate (both acid consuming minerals) and improved the lithium content in the <0.01mm fraction by over 50 per cent (from 0.22 to 0.34 per cent).

Let us now quickly gaze through the process and results of the latest attrition scrubbing testwork and leaching experiments:

Jindalee notified that ~44kg of coarse residues from the crushed core from holes MDD-012 and MDD-006 were shipped to a highly regarded metallurgical laboratory in Colorado, Hazen Research Inc. As these holes are located in a comparatively shallow part of the McDermitt resource, they represent sections of the deposit expected to be encountered early in any potential mining operation.

Then, the samples were composited to create a head sample for the metallurgical testwork, which was assayed for lithium and many impurity elements. The head sample was also examined using X-Ray Diffraction (XRD) to determine the mineral constituents, which demonstrated that lithium is almost exclusively associated with smectites.

On a sub-sample (4033-27), attrition scrubbing was undertaken at 30 per cent solids for half an hour to produce a beneficiated sample for leaching experiments. This process led to ~75 per cent of the lithium in the feed reporting to the <0.010mm fraction, indicating a 60.9 per cent uplift in grade from 0.23 to 0.37 per cent.

Following the attrition scrubbing, splits from the beneficiated sample (4033-27) were slurried, heated to 50°C, sulphuric acid added, and the samples agitated for 90 minutes. Thereafter, these samples were filtered and re-slurried in wash from the prior cycle. This process was repeated, with the residue washed, the reaction slurry filtered, and samples examined for a range of elements. The liquid samples were also reviewed for free acid.

These initial leaching experiments on beneficiated samples exhibited lithium extraction rates of 94-97 per cent, with 26 per cent less acid consumed per lithium unit relative to prior identical experiments on non-beneficiated ore.

The testwork also demonstrated that the mineral composition of the residue left after leaching is comparatively benign, comprising feldspar, quartz, and gypsum. 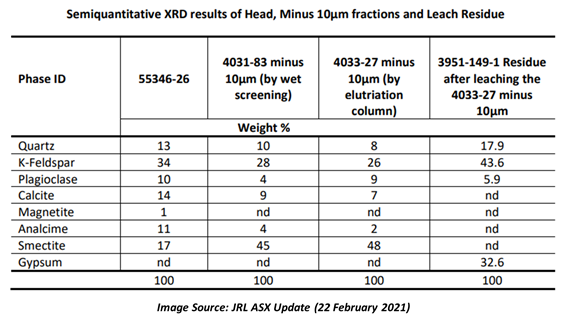 All in all, the recent metallurgical testwork results have further underlined the significance of the McDermitt lithium project, with promising outcomes from attrition scrubbing and leaching. Jindalee is continuing with additional work to further optimise lithium recoveries and reduce acid consumption.

Interesting Read: How Jindalee Resources (ASX:JRL) is Going from Strength to Strength in Lithium Space