Noxopharm has recently reported a promising outcome from this radiographic review, demonstrating a significant benefit from a combination of low-dose radiotherapy and Veyonda® in prostate cancer patients.

Noxopharm chose DARRT-1 patients having both soft tissue and bone secondary tumours. Radiation was given either to one or two symptomatic lesions, including soft tissue and bone lesions; and then, all measurable lesions were followed up, including irradiated and non-irradiated. Radiation was delivered by low-dose external beam at a dose of 20 Gy for 5 days, while Veyonda® was given daily for 10 to 14 days.

Noxopharm has now presented declared data on 15 men in the DARRT-1 trial with measurable lesions and who had a CT scan at the 6-month study visit, demonstrating the below key results:

As abscopal responses are reported appear to be a very rare occurrence, the DARRT-1 trial achieving the same in 4 out of 15 patients signifies a remarkable outcome for Noxopharm. These results become even more exciting for being achieved in an early phase study with a short Veyonda® course.

It is worth noting that abscopal responses have previously been achieved in certain cancers like lung, breast, urological cancers and melanoma using a combination of targeted radiotherapy and immunotherapy drugs like checkpoint inhibitors. However, to Noxopharm’s knowledge, this is the first time anyone has succeeded in obtaining a meaningful abscopal response rate in prostate cancer following low-dose external beam radiotherapy.

Noxopharm intends to develop the DARRT treatment regimen as a way of converting palliative radiotherapy into a therapy delivering a significant therapeutic result in end-stage cancer patients. The Company is beginning with end-stage prostate cancer, which is estimated to result in about 300,000 deaths per annum worldwide and 33,000 deaths in the US in 2020.

Noxopharm believes that all these patients can potentially benefit from treatment with Veyonda®. Moreover, the potential global demand of late stage cancer patients for multiple cycles of Veyonda® indicates the possibility for a multi-million dollar revenue from Veyonda®, positioning the drug for acquisition by major pharmaceutical companies.

Noxopharm’s DARRT regimen has been designed to be minimally intrusive and well-tolerated.

Notably, the Company has so far reported additional encouraging results from the DARRT-1 clinical study, with 10 out of 15 patients having stable disease or better after 24 weeks (see table below). 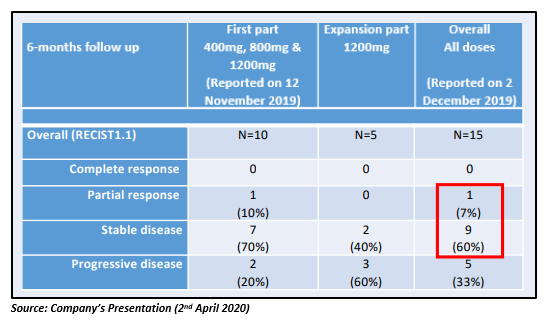 Building on the experience and data of DARRT-1 trial, Noxopharm is likely to commence DARRT-2 clinical study in early-2021, which will be a Phase 2 multi-national, control-arm study with Veyonda® being administered for multiple cycles. The DARRT-2 trial is expected to provide the data that commercial partners are looking for and satisfy the regulatory authorities.