It is reported that WEL completed successful frack of the Strawn Sand at White Hat 20#3 well targeting the Mustang Prospect. Swabbing was reportedly undertaken to remove frack fluid and stimulate oil flow, which resulted in a steady increase in oil cut at White Hat 20#3. The well is currently producing 265 – 342 bpd of fluid with an approximate 90% oil cut over the past few days. Well is still being cleaned up, meanwhile oil sales have begun, and facilities were fully installed at the prospect.

Winchester intends to assess the optimal rate of production at White Hat 20#3 and seeks to maximise production without adversely impacting the reservoir through flow rate, which is dictated by the current pump setting. Over the coming weeks, WEL intends to closely monitor flow rates as previous pumping and swabbing results indicated greater flow rates at the well.

The announcement also reads that WEL is formulating a development drilling programme for the Mustang prospect, which would focus on well location immediately offset to White Hat 20#3. The greater Mustang stratigraphic trap may include up to 15 well locations at the northern and southern extensions of the field which would be remapped. An independent prospective resources review is underway along with the planning of the early step-out development wells.

White Hat 20#2 is located 510 meters to the north east targeting the Mustang Prospect, both wells produce oil from the same strawn after a similar frack simulation with initial production of 200 bopd in April 2017 at White Hat 20#2. It continues to produce oil at 40 bopd, drill results and 3D seismic coverage on both wells confirm highly prospective nature of the Mustang Prospect coupled with relatively low risk of drilling further potentially oil productive Strawn Sand reservoirs.

WEL also fracked the existing wells White Hat 38#3ML and White Hat 39#1L and placed on pump. However, wells are producing low rates of oil and majority of frack fluid have been unloaded. These wells have recovered oil on the pumps, but wells are located on the periphery of the Mustang Prospect stratigraphic trap. Re-entry and frack of these wells would cost less than US$150,000, told Winchester. 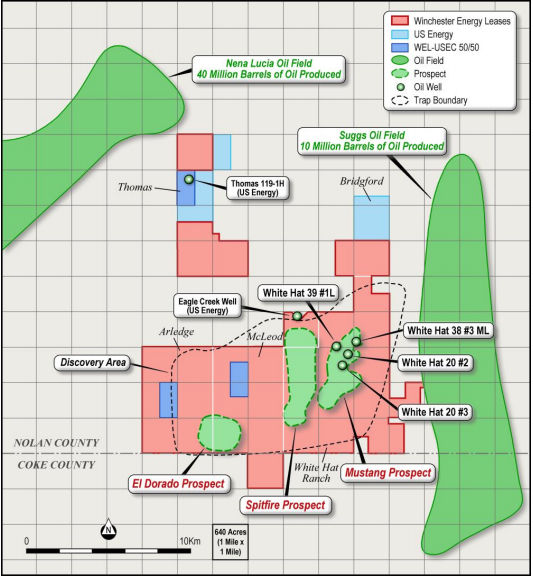 Neville Henry, Managing Director of Winchester, stated that the success of well White Hat 20#3 stands significant by using 3D data and analysis of old wells, which led to the establishment of stratigraphic trap in a sand unit of the Strawn Formation (Mustang Prospect).