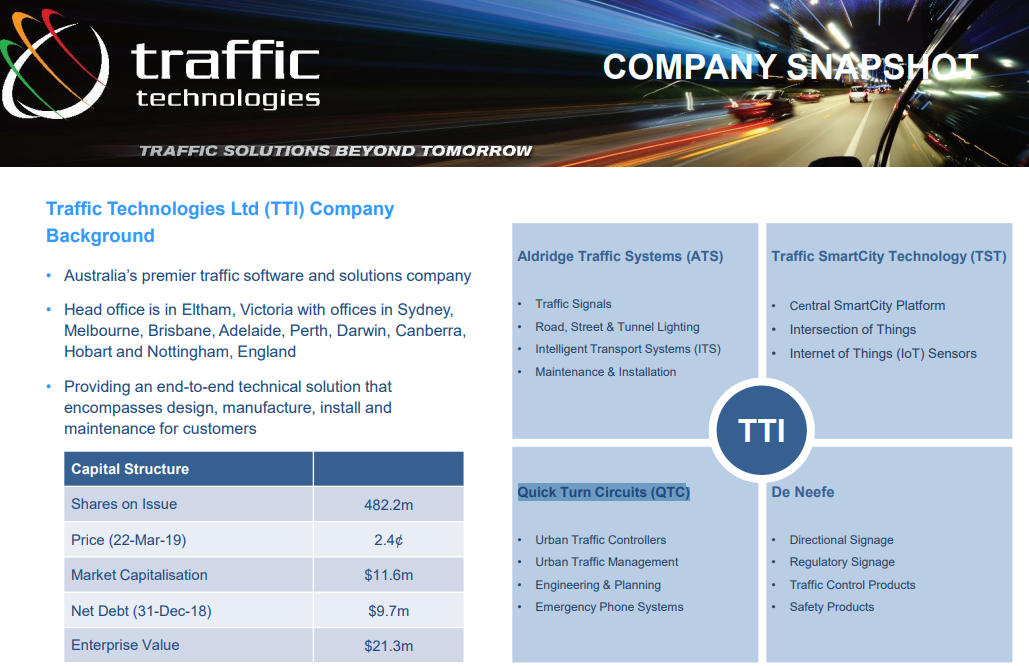 As per the company’s release on 4 June 2019, TTI mentioned that it has experienced subdued market conditions domestically for its business. The recent state elections in Victoria and New South Wales along with Australian federal election resulted in an uncertain economic and political environment. Consequently, the approval of several projects of TTI got delayed; since these projects were subject to the state governments approval. The expected commencement of these projects was to take place in FY19 period. However, TTI anticipates that the project(s) would now be awarded to Traffic Technologies and further hope their commencement by FY20.

Due to the above-mentioned delay, the company expects its operating revenue and earnings to be lower against the previous financial year ended 30 June 2018. Traffic Technologies is now expecting operating revenue to be around $48.0 million for the current year (FY19) against $56.7 million in FY18, and EBITDA expectation is around $4.1-$4.5 million for FY19, compared to $5.0 million in FY18. However, Traffic Technologies asserted that the final result would depend on the delivery of customers’ orders along with the audit. Prominently, the estimates by TTI compare the underlying trading result for the previous financial year excluding a gain on repayment of debt and a write-down of inventory, as reported.

The silver lining for TTI, appears to be the combined contract value of approximately $900k, which were awarded and expected to be completed in the current financial year ending on 30 June 2019 (FY19), as reported. Also, as per the company’s release, the combined contracts would deliver over 2,000 LED streetlights and associated hardware in Victoria region. Besides, the contracts have been granted by the City of Whittlesea, by Powercor to supply over 2000 LED streetlights to the City of Geelong and by the Shire of Yarra Ranges.

Mr Con Liosatos, Managing Director of Traffic Technologies, mentioned the disappointment by the delay of several contracts but is now positive about the three new contracts; however, he asserted that the company remains confident for upcoming opportunities and expects to announce procurement of projects for its “Smart City” platform and LED street, road and tunnel lights over the upcoming weeks. Additionally, he mentioned ongoing popularity of the company’s technologies in several export markets, including the United Kingdom, South America, the Middle East and Asia; meanwhile, escalating multi-year supply contracts with power, road authorities and municipalities would underpin the company’s earning base for upcoming years.