The Citadel Group Limited (ASX: CGL) is a software and technology services company headquartered in Australia. The company has specialisation in secure enterprise information management in complex environments. It is engaged in delivering secure information to assist real-time decisions across different segments like national security, defence, health and other businesses. 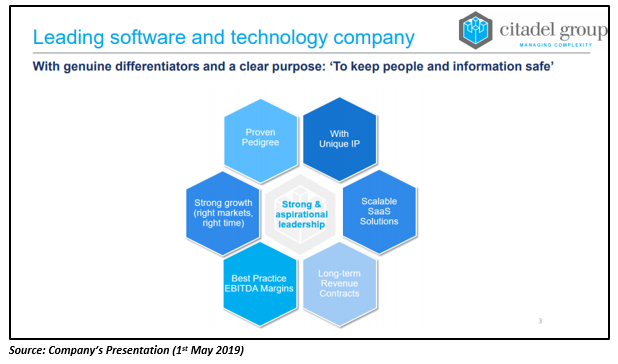 On 27 May 2019, The Citadel Group announced the acquisition of a private multi-disciplinary company, ‘Noventus Pty Ltd’, specialised in servicing the Government, Defence, Telecom and Transportation sectors. The company informed that it will acquire all of the share capital of Noventus under the agreement. The acquisition will significantly increase the scale of Citadel’s Defence and National Security offering. It will also enable the delivery of expected revenue synergies from fresh opportunities, mainly in the Defence and National Security (DNS) vertical.

The company will acquire Noventus for $5.7 million in cash with 50 per cent of the consideration to be settled on completion and the remaining 50 per cent likely to be paid in around three months.

Recently, the company informed that it expects its gross profit margins to reduce to approximately 46 per cent for the full year and its EBITDA to be in the range of $22 million to $24 million. Also, Citadel warned of a 30 per cent plunge in its full-year earnings after a tough fourth quarter. Last week, the company also responded to ASX queries regarding the Trading Update announcement.

The announcement of disappointing short-term results left many investors and analysts nervous. However, the company anticipates further gains over a medium and long-term period, relying on the consistent expansion of its qualified sales pipeline in the software-as-a-service (SaaS) business.

Citadel performed exceptionally well during the first four years of trading by rising 300 per cent, while it slumped in 2019 with the release of its half-year financial results. 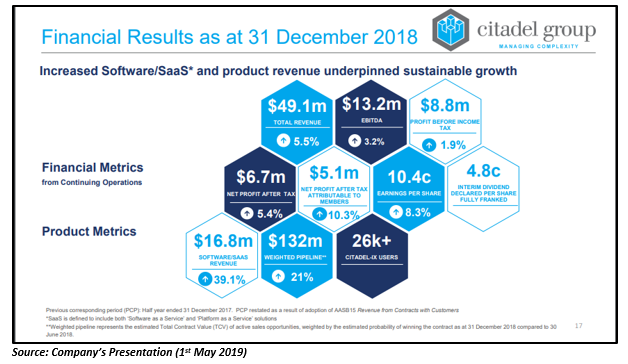 Given the magnitude of the negative earnings trajectory being reported by the company for the full year, market analysts seem to be less confident on Citadel's outlook while some of them see a pathway to 2019-20 growth.

The market cap of the company was worth $330 million two weeks ago, dropping to barely more than $200 million after the announcement of expected fall in gross profit margins.