The catastrophic incident of Bushfire that gripped the nation in the first half of the FY20 has grappled the Australian economy, devastating the lands and livelihood.

The state emergency had been declared for the regions such as New South Wales and Southern Queensland and residents had been requested to leave the areas prone to bushfires such as Brisbane and Naragba to mention few.

The deadly event has led to the slump in the already struggling retail sector with mounting costs and demand pressure. Even one of the biggest fashion companies - Mosaic Brand Limited (ASX: MOZ) was not able to slip out of the fire fist, reporting sales 8% lower than last year for the H1 FY20.

On 14th January 2020, MOZ announced the H1 FY20 trading update citing November and December as the critical time for sales. Mosaic reported 20% of the store falls in the bushfire impacted region with around 32% of the company’s 1386 stores in the area with weak consumer confidence.

Does the slump in sales impact the profit of the Company?

However, despite the fall in sales, the company’s EBITDA (Earnings Before Interest Tax Depreciation and Amortization) for H1 FY20 is anticipated to be $33 million, 13% surge from H1 FY19.

Also, it is pertinent to mention that the EBITDA increases by 36% from last year after taking non-recourse project finance costs in EBITDA, expected to be around $32 million for H1 FY20 - up by $8.5 million from H1 FY19.

The cash conversion and balance sheet reported healthier for the company with net cash of around $4 million as of 29th December 2019. Even the dividend distribution is expected to be in line with the company policy of 60%-70% profit after tax.

Strategies to mitigate loss due to lower sales

During the challenging phase of the retail sector in the era of Bushfire tragedy, Mosaic group focused on gross margin over the sales volume.

For the same, the company took the strategy of cost price improvements with a well-organized approach towards discounting. Consequently, the company gross margin rose to ~59% i.e. ~56% more than the last year.

In line with company’s strategy to increase the investment in Digital space, there has been an improvement in online sales contributing around 10% of the group revenues.

To be noted, post announcement of the trading update, the share tumbled by ~17.3% from previous day settled price to $1.87 on 14th January 2020 as shown below. 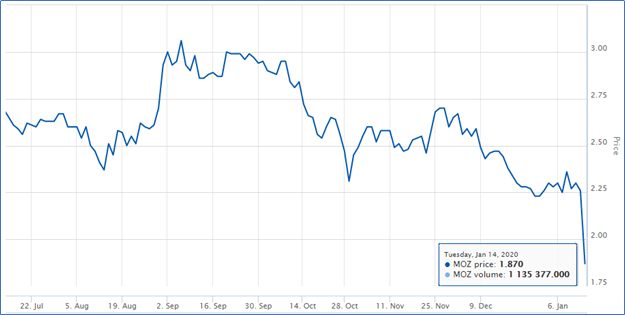 The Mosaic approach for H2 FY20

The company is well planned with an excellent product, a dedicated team and a healthy financia; position. Also, the growth in earnings during the second half of FY20 is expected to be better than the previous year as the bushfire is anticipated to slow down in the second phase and may have better market given the loss or squeezed sales in the first half.

Mosaic Group has also donated around $50,000 to the “St. Vincent de Paul Bushfire Appeal” to support customer or communities impacted by the bushfire regions and vowed to donate clothing worth $860,000 to the GIVIT charity.