A 52-week high and 52-week low price of the stock defines the complete breadth of the equity price traded in the market. Often utilised as a technical indicator by the investors, 52 weeks high/low is an essential element which defines a stock’s present value. Moreover, investors can use the information on 52-week high/low price as an indicator to precisely forecast the probable direction of the stock price movement.

Also, when the stock’s price shifts towards the above value of its 52 weeks high level, many investors start buying the stock, which is also known as fixed strategy.

Also, this increase is buoyed by some of the constituents of the index, a few of them are as mentioned in the table below: 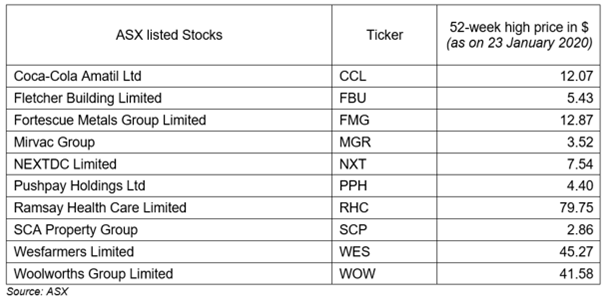 A prominent player in iron ore industry, Fortescue Metals Group Limited (ASX: FMG) has drawn the attention of investors by maintaining a consistent positive performance on ASX. As a matter of fact, the stock has climbed its 52-week high price of $12.87 on 23 January 2020. On 24 January 2020, FMG last traded at $12.480, moving down by 0.399 percent from its last close.

Also, the stock has been performing extraordinarily with a positive return of 42.71 percent and 191.88 percent in a span of 6 months and 1-year respectively.

As mentioned in the AustCham Keynote Presentation, released on 15 January 2020, the Company’s plan to build strong relationship with China may be the reason for this upsurge of the stock in the market. Post the initial iron ore shipment to China in 2008, presently, the Company has become the main supplier of seaborne iron ore to the Chinese region. FMG further plans to expand into other markets as well, including India, Japan, and South Korea.

FMG released the FY19 results for the period closed 30 June 2019 on 26 August last year, wherein it mentioned the financial and operating performance. The following attributes from the same may have contributed to the positive sentiments for the stock:

Since the inception of company’s trading on ASX (4 January 2010), there has been a positive return of 104.38 percent. Also, the stock has delivered a return of 16.35 percent and 41.34 percent in the last six months and one-year span, respectively.

The positive sentiments about the stock may pertain to the following activities of the company.

Announcement of release date of half-year results: On 20 January 2020, the company announced the date for release for its half-yearly results for this year, which is 19 February 2020.

Management change: On 20 January 2020, the company announced that Ms Aleksandra Spaseska will join as Chief Financial Officer in Kmart Group (Wesfarmers division arm); effective 2 March 2020. The current role of Ms Spaseska as Company Secretary will be taken over by Ms Vicki Robinson.

After this reshuffle, both of them will join the Wesfarmers Leadership Team. Ms Robinson currently serves as a General Manager, Legal (Corporate) and she joined the company in 2003 as Legal Counsel and subsequently, held the position of General Manager in the previously owned division of enGen, the energy producer.

Also, the company has been giving positive return since past seven days.

In terms of company’s financials and operating activities, following are the key highlights:

On 19 December 2020, the company notified the market that the Federal Court has approved all the relevant regulatory approvals for the Restructure Scheme, to combine WOW’s drinks and hospitality businesses. This merger will create Endeavour Group. The Company is planning to execute the Restructure Scheme on 2 February 2020.

Along with it, the Company also has a plan to execute the ALH Merger to amalgamate Endeavour Group with Bruce Mathieson Group’s stakes in ALH, on 4 February this year.

Tags:
ASX: FMG WES
All pictures are copyright to their respective owner(s).Kalkinemedia.com does not claim ownership of any of the pictures displayed on this website unless stated otherwise. Some of the images used on this website are taken from the web and are believed to be in public domain. We have used reasonable efforts to accredit the source (public domain/CC0 status) to where it was found and indicated it below the image.