The Group reported a 143% growth in core business revenue compared to the previous half year period of FY20. The Group revenue stands at $15.9 million, which is an increase of 79% over previous corresponding half-year period, excluding the impact of COVID on the business.

The Janison Education Group’s stock is currently trading at $0.610 per share on 27 January 2021 (2:40 PM AEDT), an almost five-year high for the stock. The stock price for ASX:JAN have seen an uptick of almost 1.5x in the last 6 months.

The Annualised Recurring Revenue (ARR) for Janison during the first half of the financial year amounted to $13.4 million, a 78% uptick over previous corresponding period. This increase over previous period was worth $5.9 million in financial terms. 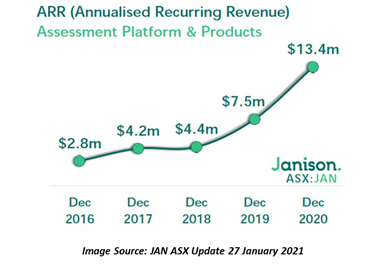 Group Reported Revenue increased by 40%, while the Platform Revenue saw an 88% growth compared to FY20 first half-year period. Janison also projected an improvement in gross margin of 8.3%, moving it up to 54%.

EBITDA projection showed a 118% increase over previous corresponding period, amounting to an increase of $1.5 million in financial terms. The current EBITDA projection for 1H21 stands at $2.7 million. Cash on hand was reported to be $10 million as of 31st December 2020. 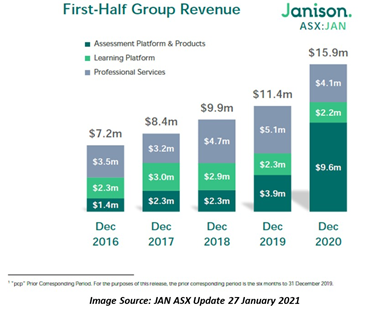 Janison secured a partnership with the prestigious global institution OECD. The partnership was formed to facilitate a mutual goal of providing worldwide education. The tie-up led to 7 countries now using the Janison platform as an educational tool. The number may be subject to revision soon as more countries are expected to join the same.

Another feat for Janison was the acquisition of ICAS assessments in June 2020 by them. The 300,000 tests delivered by Janison roped in revenues worth $4.8 million in the first half of FY21. Janison plans on expanding this initiative further which might lead to higher revenue generation.

The Group has also been working with the NSW Department of Education for over 10 years now. This partnership led to Janison providing a new assessment tool for NSW schools. This increased the company’s revenues by over $800,000 in 1H21.

BrainChip Holdings Ltd. (ASX:BRN) released its trading update for the first half of FY21. The company secured US$19.1 million cash reserves by the end of the December quarter. This was a significant increase over the previous quarter when cash reserves amounted to US$12.2 million by quarter end.

BrainChip stock prices showed a single day uptick of about 6.6% post the announcement. The share prices improved significantly during the beginning of the year 2021. The company’s performance showed exceptional growth during the month of September, post which share prices have remained restrained. The stock is currently trading at $0.605 per share on 27 January 2021 (2:44 PM AEDT).

Significant Developments during the December Quarter

BrainChip has managed to acquire several new agreements under its Early Access Program. Major advancements also came through for the Akida device developed by the company. Under the Early Access program, BrainChip Holdings signed its first commercial agreement with a Japanese semiconductor company. The agreement involved the delivery of the Akida Intellectual property to the Japanese firm.

BrainChip has also secured an EAP order from NASA for the delivery of the Akida intellectual property license. Further IP and EAP related agreements are expected to rope in increased revenues for the company by the end of the March quarter.

These developments were followed by net cash outflows worth US$2.69 million. This was significantly higher than the cash outflow of US$ 2.2 million recorded during the previous quarter. The expenses related to the validation of the Akida device, development of evaluation boards for the EAP as well as sales and marketing led to increased net cash outflow during the quarter.