Australia-based gold and base metals explorer, Carawine Resources Limited (ASX:CWX) has made a significant discovery at the Hercules prospect at the Tropicana North Project in Western Australia.

In a market update on 24 February 2021, the company unveiled multiple record high-grade intersections confirmed from the results of RC drilling at the prospect. The exciting results have indicated that Hercules could be developed into a major gold deposit at the project.

The results are for 11 of the total 12 RC holes drilled at the prospect. The campaign was aimed to test the orientation and extension of historically reported gold mineralisation along the strike and at depth at the Hercules prospect.

Hole TNRC008 intersected a combined interval of 37m at 5.58g/t gold from 84m depth. The details of three individually intersected loads from hole TNRC008 are as follows:

Apart from the above lode results, other holes, including TNRC001, TNRC006, TNRC009 and TNRC010, also encountered significant results.

Assays for the last RC hole drilled at Hercules are expected in the coming weeks. Also, the results for 8 RC holes and 80 AC holes drilled at the Atlantis prospect and within the Neale and Don King tenements, respectively, are awaited.

Good Read: A look at six ASX Gold penny stocks that have doubled in 1 year

After receiving the assay results for the last hole, additional work is required to further understand the grade distribution, geological setting, mineralogy, and orientation. The company also plans a follow-up drilling program to extend mineralisation towards northeast and southwest. 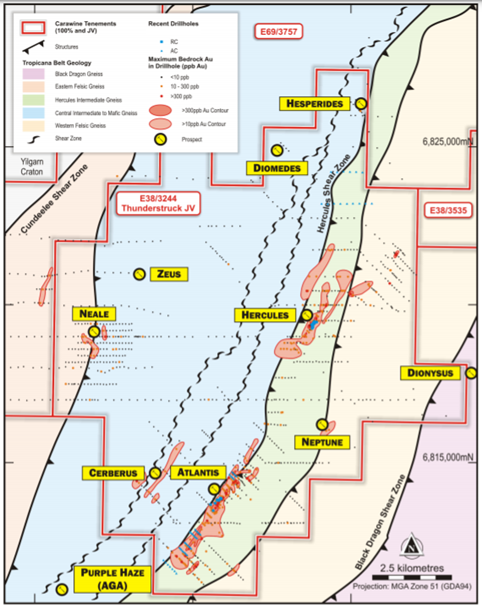