Commonwealth Bank of Australia (ASX:CBA) is a leading provider of integrated financial services comprising retail, premium, business and institutional banking, funds management, superannuation, insurance, investment, and share broking products and services. The bank was founded in 1911 under the Commonwealth Bank Act and started its operation in 1912, empowered to conduct savings as well as general banking business. The bank offers several financial services to its customers to help all Australians build and manage their finances.

Listed on the ASX on 12 September 1991, CBA started trading at AU$5.74. With time, the shares have surged up and settled at AU$105.640 on 17 June 2021. Commonwealth Bank one of the top 4 banks in Australia, with the other three being Westpac Banking Corporation (ASX:WBC), Australia and New Zealand Bank (ASX:ANZ) and National Australia Bank (ASX:NAB).

ALSO READ: How much were CBA shares worth when floated? 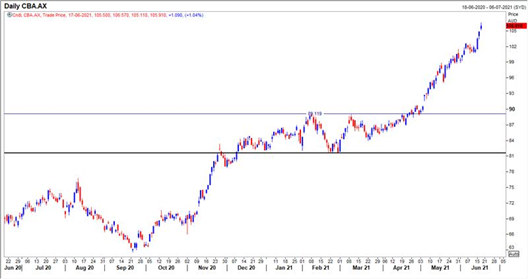 The chart above depicts the share price movement of CBA and shows that the shares moved within a specific range during the period December 2020 - April 2021. However, the shares broke the resistance level from May onwards and have followed a bullish trend.

How did the major Australian banks fare in 2020?

In 2020, the major Australian banks experienced a drop in financial performance with a 36%+ drop in the combined cash profit after tax from continuing operations compared to FY2019. The COVID-19 outbreak drove the impact on the financial performance of these banks. However, the banks continued to focus on supporting their staff and customers as they exhibited strong operations and continued lending. Last year, the banks also experienced a drop in interest margins.

In a Reserve Bank of Australia report released in April 2021, it was highlighted that after the significant drop in 1H 2020, the banks’ profitability recovered in 2H 2020 and is expected to improve further in 2021. This helped the banks raise their capital position from the existing strong levels. At present, banks have substantial liquidity and funding.

Further, banks' asset quality measures have weakened slightly in recent months as loan repayment deferrals have come to an end and support for households and businesses has decreased. Banks have also increased their provision balances to absorb the shock of the upcoming defaults.

Potential challenges that can impact the Australian banking industry

The major banks have experienced a tough period in 2021 due to scaled-down operations following the back-to-back cases of misconduct that have put them in a situation where there is less cushion against high compliance cost, record low interest rates, and increased loan loss provision.

In its report, S&P Global highlighted that that the Big 4 banks in Australia sold or are in the process of off-loading their wealth business and insurance business after the Royal Commission uncovered their misconduct and consumer rights violations in February 2019.

Because of these, the primary sources of revenue are corporate and mortgage lending in Australia and New Zealand. As a result, banks will not enjoy risk diversification and fee growth benefits, which they experienced post-2019.

IT malfunctions and cyberattacks

A major threat to the banking system is the rise in cyberattacks that could impact financial stability. Leaders from the banking sectors are working overtime to protect their systems from malicious hackers amid rising cases on institutions, staff, and customers.

RBA also highlighted the possible risk that could arise from climate change. At present, these might not pose a considerable threat to financial stability. However, if the climate change risks associated with Australian financial institutions mature and remain unaddressed, it could become a major threat to the country’s financial system.

On 27 May 2021, Commonwealth Bank updated its strategy and investments to reimagine products & services and develop the best digital banking experiences.

According to the CEO Matt Comyn:

CBA also updated about its strategic alliances with disruptive businesses to distinguish its banking proposition. It launched a pilot under the new Consumer Data Right. Through this, CBA became the first major Australian bank to allow its customers to see account balances from other eligible financial institutions via the CommBank app.

CBA reported a stronger NPAT of ~AU$2.4 billion in Q3 FY2021, driven by improvement in the economic conditions and outlook along with consistent solid operational performance centred on meeting the clients’ needs. 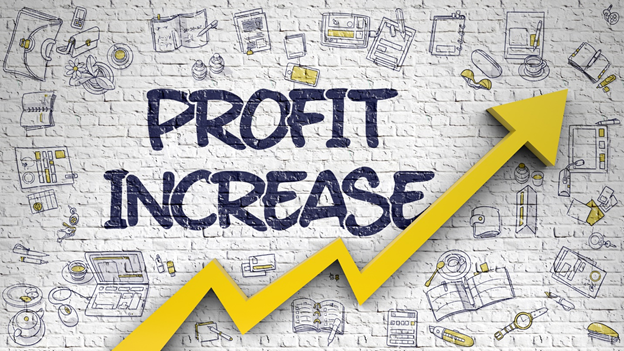 While CBA shares have been on the rise for the last couple of months, whether the share price hits the AU$150 mark or not would depend on multiple factors, including the GDP, the progress in the banking industry, and the initiatives taken by the bank in the upcoming period.