In the early trading hours, the domestic market was up after the Federal Reserve’s meeting minutes showcased a less hawkish picture than predicted by investors. However, the decline in Australian shares by the day’s end came from China’s new warning on its June quarter growth.

Nine of 11 industrial sectors on the ASX 200 were in the red zone today, erasing early hour gains. Consumer staples was the top loser, down 2.42%. The top gainer was information technology, up 1.09%, bouncing back from its recent decline. 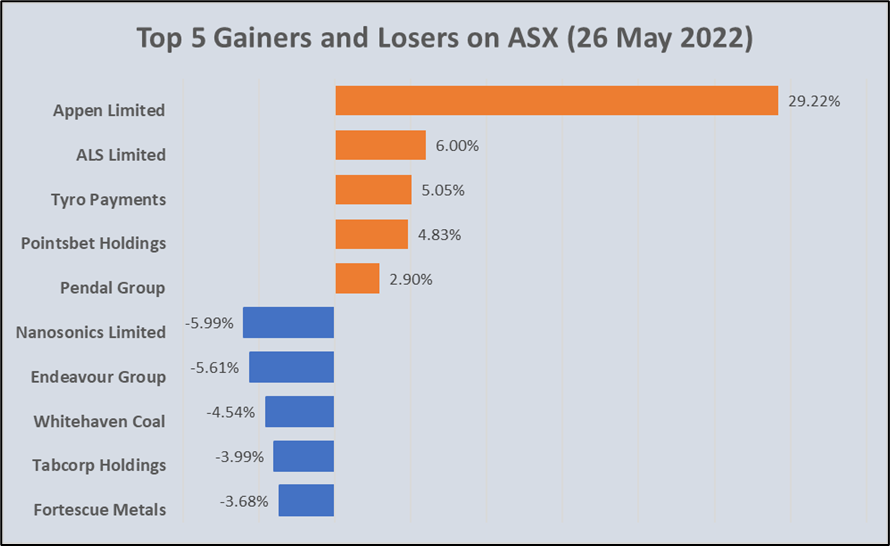 Technology company Appen Limited (ASX:APX) emerged as the top gainer after receiving an unsolicited, conditional and non-binding indicative proposal offer from Canadian Telus International to acquire 100% of Appen. On the flipside, Nanosonics Limited (ASX:NAN), from the healthcare sector, was the biggest loser of the day. While healthcare sector was down 0.65%, Nanosonics lost over 5.99%.

Taking a broader view, Asian stocks witnessed a choppy trade as markets weighed the downbeat Chinese June quarter remarks over the Federal Reserve minutes that caused initial cheers. Japanese Nikkei was down 0.27%, Hong Kong’s Hang Seng slumped 0.58% and the Korean KOSPI was down 0.18%. However, Chinese shares rose, and Shanghai’s SSE composite index was up 0.50%

Today, even the Bank of Korea raised its key interest rate to tackle inflation. New Zealand’s central bank is expected to come out with combat steps against surging prices. Other key events on watch out for are the US GDP data, personal income and spending data and the University of Michigan’s consumer sentiment data.

Global liquefied natural gas (LNG) market was bracing uncertainty on the backdrop of muddy demand forecast from Europe and top importer China. Oil prices were rising, on signs of tight supply and Hungary’s plans to ban imports from Russia. Brent crude was down 0.35% while US West Texas Intermediate (WTI) moved up 0.5%. Analysts were seeing a drop in China’s demand for thermal coal in the remaining first half, with ongoing virus restrictions and an economic slump.