What is Assemble Protocol (ASM) crypto and why is it in focus?

Recent Update: The company released an announcement wherein it notified about release of a document by Hong Kong based Bucephalus Research Partnership Limited. Rural Funds Management Limited (RFM) advised that the criticism in the document were similar to the ones mentioned the recent documents released by short seller Bonitas and suggested that investors should rely on 3 announcements made by RFF on 27 August 2019, two out of which pertain to the financial results of FY19 with the third one containing Ernst & Youngâs response to the Bonitas Document.

Background: Bonitas Research LLC released a report about the financial health of the Rural Funds Group on 6 August 2019. As per the document, the firm stated that RFF profitability included over A$28 million of fabricated rental income paid to RFF by two of its third-party lessees. The document stated that Rural Funds Group inflated its financial performance, with net assets overstated by 100%.

Rural Funds Management Limited responded to the document, negating all the allegations of financial impropriety and irregularity and engaged Ernst & Young to independently investigate the matter.

Report by Ernst & Young: As per the independent investigation conducted by EY, the allegations in the document released by Bonitas Research LLC were not substantiated. The firm supported RFMâs response to the document.

Legal Proceedings against Bonitas: Rural Funds Management Limited has issued legal proceedings against Bonitas Research LLC and its principal, Matthew Wiechert, stating that it has suffered a loss and damages due to the allegations made. The company stated that Bonitas and its principal are liable for compensating RFM, including by way of an account of profits. Any damages received in excess of the cost of the action will be paid to Rural Funds Group. 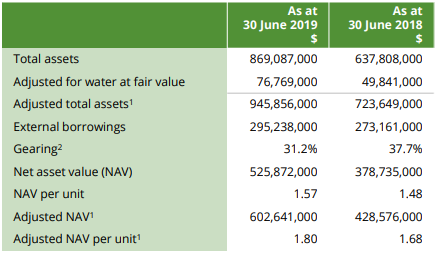 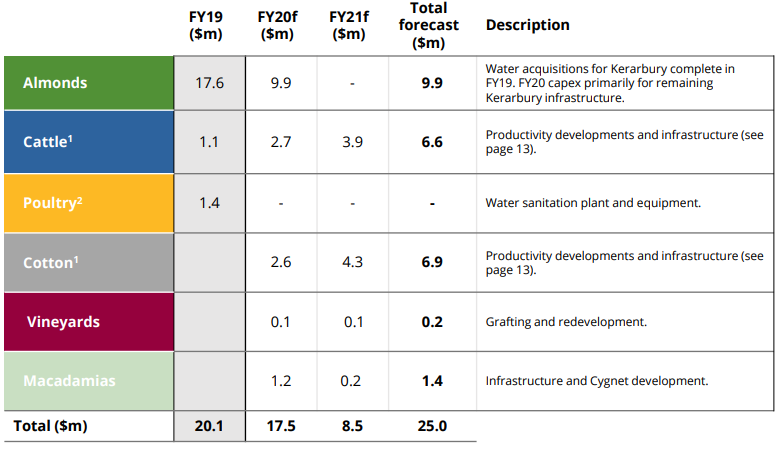 Key activities during the year

Forecast: The company has forecasted adjusted funds from operations (AFFO) yield of 7.0% for FY20 and a payout ratio of 78%. Distributions per unit for FY20 has been forecasted at 10.85 cents, consistent with annual growth target of 4%.