Mining is the process of extracting natural resources including minerals and metals from below the ground. Usually carried out by a domestic or an international company, mining is among the most challenging industries, as the process can have a major impact on land-based communities, as well as on the environment. As a result, to perform this process, a company needs government approval.

In order to ensure that miners are operating in line with global best-practice standards, every country has a different set of regulations and rules that a company needs to follow to get the licence to perform mining activities. It becomes imperative that a mining company receives government support to carry out operations in a smooth manner.

Even for an economic standpoint, responsible mining helps in stimulating economic growth by offering several benefits like:

Madagascar is an island country (mineral rich) known for holding deposits of graphite, copper, iron, gold, among others. Both small- and large-scale mining operations are carried out in Madagascar, and the African nation is looking to promote itself as a mining friendly jurisdiction, which is highlighted by its support to BlackEarth Minerals NL (ASX: BEM), an Australia-based mineral exploration and development company, focusing on a low cost, high value product, GRAPHITE.

Why Madagascar for BlackEarth Minerals?

BlackEarth Minerals has two wholly owned projects - Maniry and Ianapera - in Madagascar, both focusing on high-value graphite, a key component for markets including batteries, expendables and refractories. Majority of the company’s current resource is positioned on a 40-year mining lease. Additionally, the company’s tenement position is guaranteed, with significant expansion potential existing for BEM within its declared exploration target.

BlackEarth Minerals chose Madagascar due to:

Moreover, the country became the world’s fifth largest graphite producer, accounting for 19% of total graphite production in 2019 (August 2019), compared with 11% in 2018. 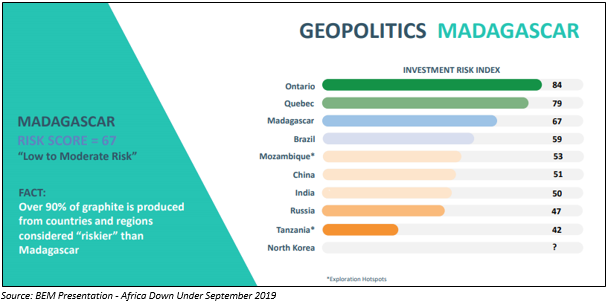 Maniry is the company’s flagship project located in the southern region of the country. For the Maniry Project, BEM recently announced positive updates, as independent test work on concentrate from the project unveiled high purity graphite anode materials that met the purification specifications required by lithium-ion anode material producers. Graphite owned by the company has a high distribution ratio of large flakes.

Owing to these favourable results, BEM inched closer to executing an offtake agreement, for which it is currently under discussions with several interested parties. BEM intends to finalise the feasibility study into the flagship project in 2020 and expects project commissioning in the next year.

Based on the outcomes of the current project study, the project is believed to be a robust and financially strong graphite project by international standards.

In the month of June 2019, the company held a meeting with Madagascar Minister of Mines and Strategic Resources, Mr Fidiniavo Ravokatra, during which it discussed 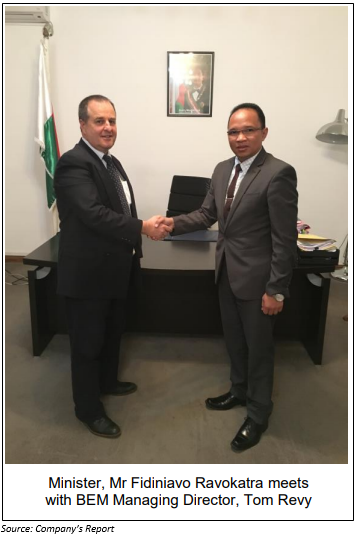 The meeting was in favour of the company, as the Madagascan Department of Mines (BCMM) offered its support towards fast tracking the Maniry Project. Additionally, the national government endorsement highlights the strategic value that the project holds towards the development of the region.

Another Feather in the Cap - Ianapera Project

Located 75km north of the Maniry Project, this graphite project is the company’s another significant project in southern Madagascar. During the second half of FY19 to June 2019, BEM reported high-grade graphite trenching results at the Ianapera Graphite Project as well as defined an exploration target at a grade ranging from 10 per cent to 20 per cent TGC. 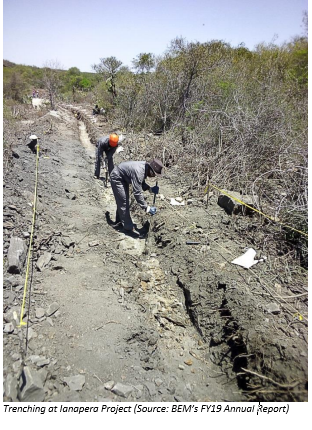 With solid support from the government, positive test results and access to key infrastructure, BEM is expected to be fired up to speed up its operations in Madagascar, one of the very prospective regions of Africa.