Australia Pacific LNG is a joint venture of three oil companies Origin (37.5%), ConocoPhillips (37.5%) and Sinopec (25%) and is the largest producer of natural gas in eastern Australia. It is also the major exporter of liquified natural gas to Australia.

This time, the source of additional cash outflow is through the buyback of convertible shares issued to Origin and the co-investors of Australia Pacific LNG: ConocoPhillips and Sinopec.

Recently, the board of APLNG signed off on a selective buyback of $271 million, divided amongst its three shareholders in the respective proportion. Based on this, Origin will be receiving another $102 million from Australia Pacific LNG which will be reflected in its annual report.

It shows that the board of Australia Pacific LNG is willingly returning the surplus cash to its investors in a timely manner.

In the presentation given by Origin Energy Limited on 21 February 2019 related to its half-yearly results for the period ended 31 December 2018, Origin highlighted the change in the proportionate Free Cash flow of origin in HY2018 and HY2019.

However, the best part is that APLNG still has ample more convertibles left to buy.

As per the half-yearly results of Origin Energy Limited by the end of 31 December 2018, during the construction phase of APLNG, its other shareholders along with Origin had contributed capital to APLNG through ordinary equity and through investment in the preference shares known as MRCPS that was issued by APLNG.

APLNG, on the other hand, will be distributing the funds to its shareholders initially through a fixed dividend of 6.37% per annum on the MRCPS. This distribution of the funds will be considered as an interest income by Origin. The second distribution would be through the buy-back of MRCPS.

Origin announced that APLNG had recorded $1.9 billion free cash flow of six months to 31 December 2018 with an effective oil price of $US73 a barrel, post which the buyback comes into the picture.

Out of $1.9 billion, $1.2 billion will be distributed to the Origin shareholders based on the proportion of their holdings.

Origin has received $393 million, and Australia Pacific LNG retained the remaining $54 million for other operational and debt requirements. 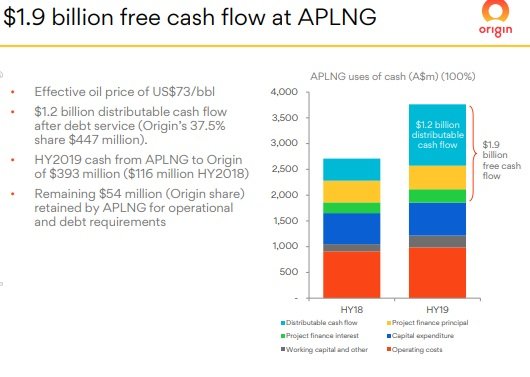