Mogul Teams Up with One of the World’s Most Prominent Esports Brands, Alliance

eSports Mogul Asia Pacific Limited (ASX: ESH) is the world’s best online esports tournament platform, which provides full tournament automation. The company’s registered office is in Australia and it was officially listed on ASX in October 2011.

On 16th May 2019, eSports Mogul announced that it has signed one of Europe’s leading esports teams, Alliance, in a revenue share deal. Alliance along with ESH will establish its own annual tournament series and membership offering, which will support fans and European esports. As a part of the binding Heads of Agreement, both the companies will target 100,000 monthly subscribers onboarding by Q3 FY20. The company expects its subscription fee per member to be $US5 per month.

ESH will provide its market-leading esports tournament platform to help Alliance in establishing a large event series. This will be the first time when an esports team will be able to run tournament series under their own brand name with more than US$50,000 in cash and prizes on the line in 2019 alone. The company stated that Alliance’s tournaments and membership on Mogul will be promoted to Alliance’s following of over 2.2 million fans throughout Twitch, Instagram, Twitter and Facebook. The followers will now be driven to Mogul to compete in tournaments and sign-up for benefits and perks with an Alliance membership.

The company also mentioned that it will now plan and host annual Alliance tournament series in Europe to stimulate grassroots activity and the region’s esports industry in collaboration with Alliance.

In the Q1 FY19 update, the company mentioned that revenues stood at $20,000, which was a result of experimentation and market-testing since the launch of payment capabilities, including paid entry, VIP entry. The company also pointed out that Silver Slam was successfully completed in Southeast Asia with 1,500 tournaments offered to players and it had reached a major milestone of 1 million registered users.

ESH by release stated that it had requested ASX for immediate trading halt over the company’s securities, because of pending announcement to the market regarding capital raising. Mogul also stated that it had requested trading halt till 20th May 2019 or release by the company of further announcement to market regarding a capital raising whichever is earlier.

ESH reported net cash used in operating activities of $1.241 million, which consist of marketing and advertising expenses of $0.678 million and $0.207 million of staff costs, respectively. 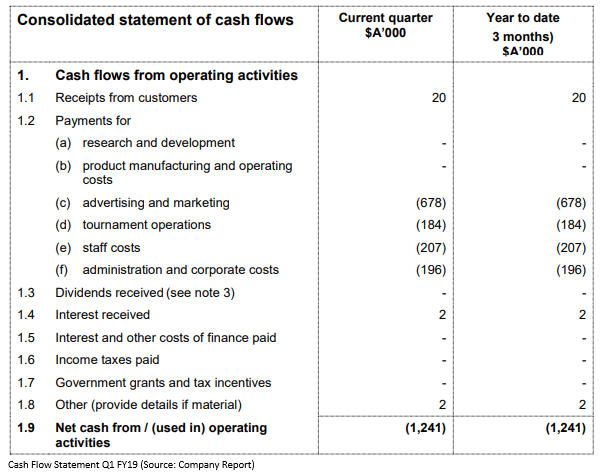