Living Cell Technologies Limited (ASX:LCT) is an Australasian biotechnology company. Its operations are based in New Zealand. It thrives to improve the well-being of people suffering from serious diseases worldwide. It discovers, develops, and commercialises regenerative treatments to aid in restoration with the help of naturally occurring cells.

Parkinson’s disease affects the neurons in the brain. The pharmaceutical treatment focusses on restoring the balance of dopamine and other neurotransmitters. As the disease progresses, the effect of this treatment tends to decline. Post this stage, patients are treated with Deep Brain Stimulation (DBS), wherein a medical device is surgically implanted in the brain to control movement. However, DBS is not curative or neuroprotective, and does not influence the progress of the disease.

The NTCELL® is LCT’s lead product and is alginate coated. It is a capsule comprising of neonatal porcine choroid plexus cells in clusters. The source of this is a breed of pigs, originally discovered in sub-Antarctic Auckland Islands. After implantation in the brain, the capsule acts like a neurochemical factory. It produces nerve growth factors to aid towards the disease. 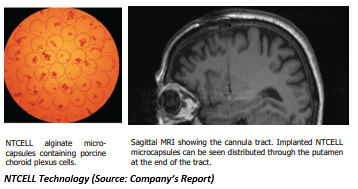 On 13 May 2019, after a 24-month follow up of 18 patients, LCT released the data received from Phase IIb study of NTCELL® for Parkinson’s disease. The company mentioned that after the test tenure, 4 people with the disease who had received 80 capsules continued to depict benefit as measured by the change in the Unified Parkinson’s Disease Rating Scale. This was a greater figure compared to the 2-placebo group. However, in the 6-placebo patient group, the results were different. Patients who had received 40 capsules showed no difference from placebo.

The company has requested its statistician and a panel of internationally recognized experts of clinical studies to further break down this study to provide more inferences. LCT will confirm the future strategy for NTCELL®, on receiving the detailed analysis. 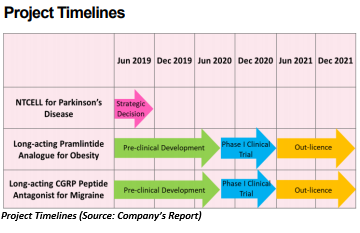 In an earlier clinical trial of NTCELL, The Phase I/IIa, the aim was to understand the endpoint of safety. When met, it halted the progression of the disease three years after implant. The results from this trail paved the path to design the Phase IIb trial, which was at a larger scale. This had concluded the most effective dose of the capsule. The initial target of the sub-group was also identified along with placebo component of the response.

The 26-week results met safety endpoints but not the success endpoints. The success rate subsided after 12 to 18 months. As a result of this, patients were checked upon after an extension of the study. Defining the most effective dose of NTCELL was the prime objective of the Phase IIb study. It comprises of three groups of six patients in each. Two patients from all the three groups underwent surgery without implantation of the capsule, to act as a control. The first group received 40 microcapsules and the second received 80 of NTCELL. While, the third group was given 120 capsules.