As per the media reports, the U.S. Drug Enforcement Administration would expand medical and scientific research work of marijuana, which implies progress that could eventually lead towards the boosting of the cannabis industry’s prospects. On 27th Aug 2019, post the closure of the trading session, the S&P/ASX 200 Health Care (Sector) was at 35,871.2, with a rise of 0.66%.

Let’s go through the updates on the 5 cannabis stocks.

Cann Group Limited (ASX: CAN) is into a business of cultivating medical cannabis for fulfilling both medical and research objectives. The company, through a release dated 27th August 2019 updated the market about increasing capacity of Mildura facility by 40%. It has targeted to increase production capacity of dry flower to 70,000kg annually. The company anticipates producing annual revenue in the range of around $220 million - $280 million from the increased capacity on the back of the current wholesale price of cannabis dry flower. The company added that the completion of the Mildura facility is expected to occur in Q4 CY20, along with cultivation of mother plants at the site to begin in Q3 2020. However, the siteworks have been wrapped up and construction of the facility is now ongoing.

A look at Full-year Results Presentation:

On 27 August 2019, CAN released an annual year report presentation, wherein it mentioned that it has partnered with IDT Australia for manufacturing support in relation to cannabis based product formulations. 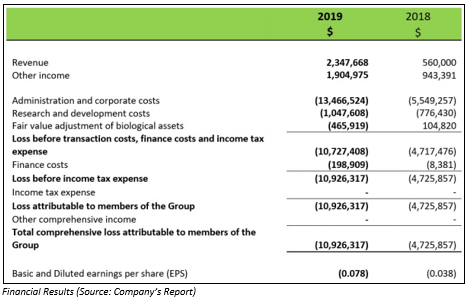 On the outlook front, CAN anticipates beginning exports as per the supply and offtake agreements with Aurora. Also, the company would keep on developing in the direction of the forming of its third-party GMP product generating capacity with IDT.

Cann Global Limited (ASX: CGB) is into mining exploration and evaluation as well as legally growing and cultivating hemp and medicinal cannabis products in Australia.

The company, via a release dated 26th August 2019 provided operational update to the market, which is related to the company’s nutraceutical manufacturing schedule, as well as the visit of Israeli based Pharmocann formulator to Australia. It was mentioned in the release that Cann Global Limited has 50/50 partnership agreement with Pharmocann, which is Israel’s leading Cannabis company.

The objective behind the agreement is to produce and sell Pharmocann’s unique advanced cannabis-based treatment formulations, dermatological and cosmetic beauty products. It added that on 22nd August 2019, carried on an inspection of facilities as well as discussion of Pharmocann’s formulations and manufacturing process by Pharmocann’s VP of Research & Development, Dr. Benjamin Rosenstein. The inspection was witnessed by Board members and senior managers of the company, which included representatives from its Food Division, Media Division, Research Division, Bio Health Directors and the Medcan Directors and QA officers.

On 23 August 2019, CGB declared its quarterly results, for the period closed on 30th June 2019,wherein mentioned that by the end of the period, the net cash outflow of CGB amounted to A$1.037 million after settling major payments for administration and corporate costs as well as for development amounting to $0.493 million and $0.329 million, respectively.

MGC Pharmaceuticals Ltd (ASX: MXC) is into development and supply of high quality cannabinoids based pharmaceutical products. As per the release dated 27th August 2019, the company and IHPS (Slovenian Institute of Hop Research and Brewing) has received an approval for holding a comprehensive, large scale research project on the cultivation of cannabis for medical purposes as well as the standardisation of post cultivation production processes, from genetics via API from Slovenian Ministry of Health .

Adding to that, the project would take place at the Slovenian Institute of Hop Research and Brewing’s large-scale secure facility, which include a highly protected quarantine base for the cultivation of various strains of cannabis for medical purposes, that have a use in pharmaceutical manufacturing. Previously, the company had inked two agreements with Cannvalate and Health House. 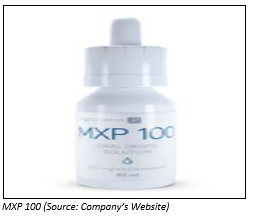 In another recent update, the company further stated that it had received an approval for conducting a controlled trial on the effect of CannEpilTM from Human Research Ethics Committee (HREC). It added that CannEpilTM has been developed and manufactured at the MXC’s European GMP manufacturing facility, which is a 20:1 cannabidiol (CBD) to tetrahydrocannabinol (THC) compound formula.

The controlled trial on the effect of CannEpilTM would be one of the first trials in order to assess the impact of cannabis based medical products.

AusCann Group Holdings Ltd (ASX: AC8) is primarily involved in bringing skills and operations of the medicinal cannabis value chain at one place via farming, manufacturing and selling of the CBD.

Recently, the company through a release dated 31st July 2019, updated the market with activities for the quarter ended 30th June 2019. The company stated that Mr Ido Kanyon, an experienced global pharmaceutical executive has started to work as the company’s new Chief Executive Officer from 22nd May 2019.

During the quarter, the company has imported active pharmaceutical ingredient medical cannabis concentrate from MediPharm Labs, which is a Canadian supplier. The company further stated that the import of resin from Canada would be primarily used for product development batches of the company.

After the end of the quarter, the company had inked new supply agreement with Tasmanian Alkaloids, which is a world’s leading manufacturers of controlled substances producing alkaloid raw materials. It added that under the revised agreement, the company has secured a minimum of 30% of its resin supply requirements from Tasmanian Alkaloids for an initial period of 3-years, which can extend for the further 3-year term. Previously, the company updated the market with the first half results.

The following picture provides an overview of cash flow for the quarter: 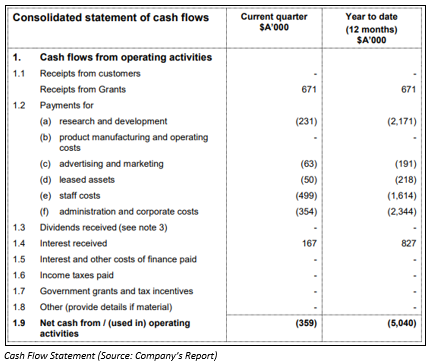 Medlab Clinical Limited (ASX: MDC) is into the sale of nutraceutical products and also involved in research and commercialisation of pharmaceutical.

MDC through a release dated 16th August 2019 announced that it has successfully wrapped up the phase 1 trial of Nanabidial™. It was concluded that NanaBidial™ proves safe, fast acting and positive for absorption and metabolism in a healthy human cohort. It was further added that NanaBidial™ is a high CBD, low THC containing formula, which uses the company’s proprietary delivery platform, NanoCelle™.

This is the second PK (pharmacokinetic study) on the company’s proprietary cannabis formulations utilising NanoCelle™ that confirms the drug is absorbed and detected in the blood circulation.

It was also mentioned in the release that the clinical study trial was a blinded, randomised trial, which showed that plasma concentrations were achieved quickly with a product half-life of around 4 hours for the study cohort. The company, in May this year inked Heads of Agreement for NanaBis. 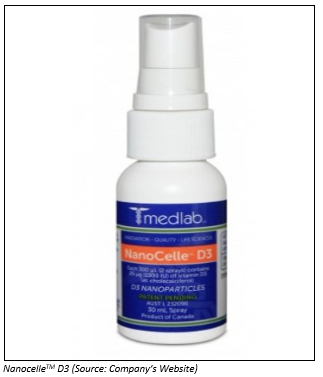