The drilling program consist of drilling of over 1800 to 2000 metres and will test new target areas including the ones zeroed in from the recent Induced Polarisation (IP) and Sub Audio Magnetics (SAM) geophysical surveys completed by the company on the project area.

Further, the drilling program will test new structural targets identified from the recent diamond program surrounding the Gimlet resource area. The RC drilling campaign would be followed by the government’s Exploration Incentive Scheme (EIS) co-funded diamond drillhole targeting the Gimlet mineralisation below 500 metres. The proposed diamond drill hole would be the deepest across the Teal-Gimlet mineralised corridor. 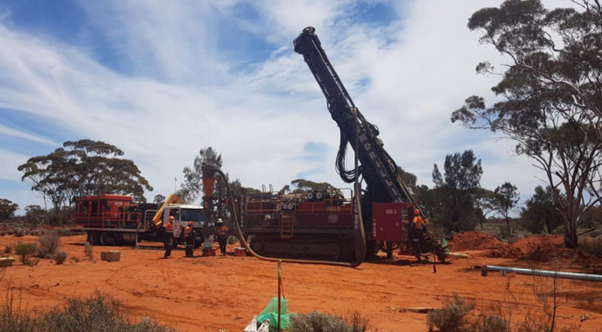 The RC drilling program includes drilling at the known halo within the Horan’s Dam prospect which includes a ~ 3km long x 300m wide gold anomaly (> 100 ppb Au) in the regolith zone identified from the historic drilling program. The anomaly occurs along the NNW-SSE trending “Eastern Shear Zone”, parallel to the mineralised zone at Gimlet. 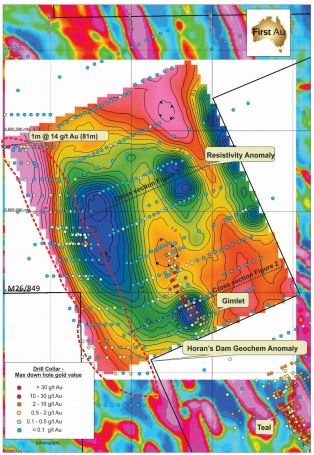 Fresh mineralisation at the Horan’s Dam prospect is manifested at the northern extent of the structural trend, with historical De Grey Mining RC drilling program which intersected 1 metre at 14 g/t gold, 81 metres downhole. First Au plans to target this intersection within the current phase of drilling program.

The recent 3D IP Survey conducted over a 2 km2 area, identified a resistivity anomaly coinciding with the Gimlet mineralisation. This may either represent alteration or a distinctive lithology which potentially favours the mineralisation.

The area displays evidence of possible demagnetisation of upper layer in the aeromagnetic data which may reflect hydrothermal alterations. Further, RC program will test similar resistivity high, which is modelled to be located within the fresh bedrock and remains untested by historical drilling programs.