ERL has reported its developments during the quarter ended 30 June 2020 at its YT01 Prospect as well as Smith Well Prospect, which lie under the Yuinmery Copper-Gold Project.

During the quarter, ERL has continued to deliver excellent exploration results for the Yuinmery Project with another two RC drill programs and completed a downhole geophysics survey.

Let us discuss in detail the developments across the Company during the quarter.

Located 470km North East of Perth in the base metal-rich Youanmi greenstone belt, Yuinmery Copper-Gold Project witnessed the commencement and completion of two RC programs and a Downhole Electromagnetic (DHEM) survey during the June 2020 quarter.

Prior to these programs and survey, the Company had successfully conducted two reverse circulation (RC) drilling programs during the March 2020 quarter. Final assay results for the January and March 2020 RC drill programs were received in April 2020 whereas RC drill program of three holes and one re-entry for 462m drilled at the Yuinmery Copper-Gold Project was concluded in May 2020.

All samples for the June 2020 RC program have been submitted to the laboratory and results remain pending as of now.

Encouraging assay results were received from the January and March RC drilling programs. In March, copper oxide minerals above the base of oxidation were intercepted at YT01 prospect through RC drilling. Moreover, holes YRC20-14, YRC20-15, YRC20-16, and YRC20-17 intercepted trace and disseminated sulphides consisting of chalcopyrite, pyrrhotite and pyrite at the base of the oxidation interface.

During the May RC drilling program, Hole YRC20-14 was extended by 24m based on the end of hole copper anomalism.

Later in June 2020, one RC hole was drilled under YRC20-14 to test for extensions of copper-gold mineralisation below the base of the oxidation, all samples from which have been submitted to the laboratory and results are pending.

So far sulphides, including chalcopyrite, pyrrhotite and pyrite in varying concentrations have been intercepted through drilling during 2020 and assay results from the drilling program indicate the potential of the prospect to host substantial copper mineralisation with selected results including:

Subsequent to receiving these encouraging results, three RC holes were drilled in May to check the additional DHEM data as compared to 2008 anomaly, which returned the following results: 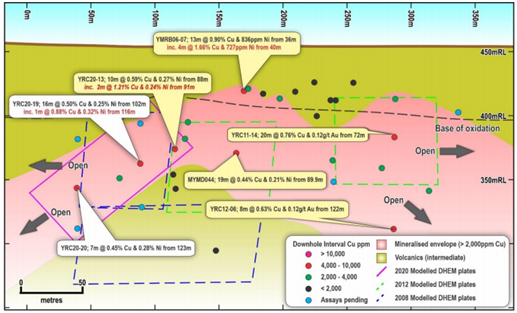 Importantly, Smith Well is interpreted to lie within a broad stratigraphic horizon, which includes multiple prospects such as C-Zone and Claudius, where promising historical Cu-Au mineralisation has been identified. Moreover, unique elevated nickel content of Smith Well is interpreted to be the result of fluids from a mafic intrusion interacting with the original copper-gold mineralisation within the volcanics.

Empire is of the view that additional exploration is needed for a definitive assessment at the Smith Well Prospect.

Investment in NTM and Cash Position

Net cash used in operating activities for ERL during the quarter was approximately $302,000 with cash on hand at quarter-end of $598,000.

ERL’s is still in disagreement with Eastern Goldfield Milling Services Pty Ltd (EGMS) regarding gold unaccounted for following a toll treatment milling campaign conducted by the later at its Burbanks Gold Processing facility in late 2017.

In this event, Empire Seeks to recover gold valued more than $1 million.

The matter has been referred to Arbitration for which, Empire had submitted documents to the Arbitrator during the quarter, and the next arbitration hearing is scheduled to be heard in early September 2020 quarter.

ERL is committed to building a sustainable and lucrative mineral business and seeks to obtain value from direct exploration in its current projects as well as identifying value accretive investment prospects that supplement its development objectives.