Earlier Today, Resolute Mining Limited (ASX:RSG) announced the signing of the definitive transaction agreement to sell its Queensland based Ravenswood Gold Mine to a consortium comprising of mineral resources private equity partner EMR Capital and Singapore based Golden Energy and Resources Limited (GEAR).

The transaction includes a cash consideration up to $300 Million with an initial upfront payment of $100 Million in the form of cash and Promissory notes, each of $50 Million value. The further payments include $50 Million over a period of four years contingent on the gold prices and the remaining $150 Million based on the actual investment outcomes on the Ravenswood gold mine which recently commenced the first stage of its expansion and is expected to go forward with further stages.

For Latest Update on the Deal Do Read Here

What was Cooking Prior to this Deal?

On 14 January 2020, responding to the media speculations Resolute mining confirmed that the Company has been negotiating with Melbourne based EMR capital over the sale of Ravenswood gold asset. The acquisition, would enable Resolute Mining with gold mining operations based only in Africa. Resolute reported having entered into exclusive negotiations with EMR Capital Management Limited on a possible acquisition for Ravenswood with the exclusivity of the agreement expiring today (15 January 2020) at 5 pm WST.

The evaluation of future capital requirements of REP was estimated and was analyzed, along with maximizing the potential for Resolute's shareholders. The discussions advanced on the sale of Ravenswood asset to EMR Capital and its partners for overall proceeds of up to US $300 Million which comprises of US $100 Million of initial upfront value and $200 Million as additional deferred considerations, contingent on the gold futures prices, production guidance from the Ravenswood expansion project and the return on the investment in the REP. The negotiations are in the advanced stage but do not guarantee the deal between Resolute and EMR Capital as of now and regular updates on the advancement would be shared by the Company.

More about Resolute Mining and its operations: Read here

EMR capital is a mineral resources private equity firm. EMR owns 9 mining operations across 7 countries and holds a record of attaining excellent returns on its investments. The private equity firm holds mines involved in copper, gold, coal and potash. The firm has enough experience in working on mines with varying mining methods and commodities. If the acquisition goes through, EMR might enjoy the advantage of increased gold production at times when gold is on a rally and therefore maximizing the profits. 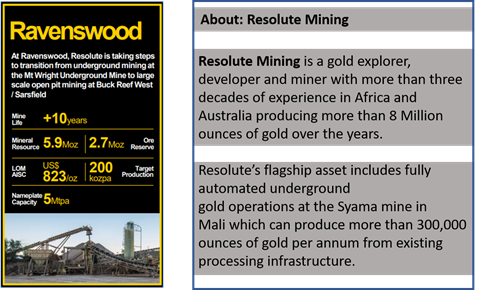 The Syama underground operations are low-cost large scale mining operations with mine life beyond 2032. Resolute also owns the Mako mine in Senegal for which it recently published an update for the diamond drilling results. The objective for the exploration activities at Mako is to extend the life of mine by expanding the mineral resource estimates beneath the operating open pit and the nearby satellite pits. Resolute mining acquired Toro in mid -2019 and upgraded its Ravenswood processing facility to enhance the production in Australia. Resolute's production and cost guidance for the 2020 financial year is 500,000 ounces of gold at an AISC of US$980/oz.

Resolute expects to produce 500,000 ounces of gold in FY2020 (January -December) at an AISC (All-In Sustaining Cost) of US$980/oz. The company expects the following results from its operations-

What’s in for Resolute?

Resolute targets itself to be a low-cost large-scale gold producer and selling an asset like Ravenswood will bring down the Group total All in sustaining cost (AISC). Also, the sale of Ravenwood operations at a time when the gold prices are soaring will help the Resolute mining get the fair price for the Ravenswood operations.