On 7th August 2019, one of Australiaâs leading banking group, Commonwealth Bank of Australia (ASX: CBA) revealed its full year results for FY19. During the year, the bankâs cash NPAT dropped by 4.7% to $8,492 million, mainly impacted by remediation, fee removals, risk and compliance. Alongside, the bankâs statutory profit declined 8.1% to $8,571 million.

The total operating income of the bank declined by 2% over the year, reaching to $24,407 million in FY19 from $24,914 million in FY18, mainly impacted by the decline in the net interest margin, customer fee removals and reductions as well as the impact of weather events. 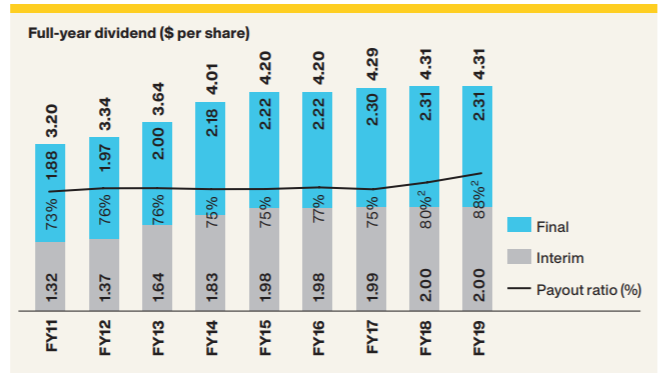 CBA is becoming a simpler bank by focusing on its core banking businesses and simplifying its organisational structure to reduce costs and create the capacity to invest while also reducing risk and making it easier for its customers and people to get things done. To support the implementation of its strategy, CBA is investing in four critical capabilities; operational risk and compliance, cost reduction, data and analytics and innovation.

Progressing on its strategy of simplifying portfolio of businesses, the bank sold various businesses during the year, which includes Sovereign and TymeDigital. Recently, in August 2019, the bank also sold Colonial First State Global Asset Management and is now progressing to divest its other life insurance businesses â CommInsure Life in Australia and its interests in BoCommLife in China and PT Commonwealth Life in Indonesia. Reducing the complexity of its business and processes is helping to improve the customer and risk outcomes.

This year, the bank removed various fees and took action on remediation to deliver better outcomes for its customers. To strengthen its leadership position in the digital space, the bank is bringing together the best technology with the best service to deliver enhanced customer experiences.

While this yearâs headline results were impacted by several reasons like customer remediation costs, compliance expenses and elevated risk, the bankâs core business performed well during the year, majorly supported by the growth in the business lending, home lending and deposits.

Although the bank is operating in a lower growth environment as mentioned by CEO, Matt Comyn while providing an outlook, CBA is expecting some relief from the improving housing market, which includes improved clearance rates, stabilisation of prices in Melbourne and Sydney, and somewhat higher housing credit growth. The bank is also relying on the support of population growth and commodity prices to drive a strong trade performance.

At the end of FY19, the bankâs CET1 ratio was above APRAâs âunquestionably strongâ target of 10.5%, with the CET1 ratio increasing 60 basis points to 10.7%, primarily driven by the organic capital generation of 55 basis points.

In its Business & Private Banking business (B&PM), CBA reported NPAT of $2,658 million, down by 7% on pcp, impacted by home loans margins, remediation expenses and increased LIE. CBA is committed to invest in its business digital and analytics platforms, including the extension of the Customer Engagement Engine (CEE). CBA has hired more corporate bankers and created a new team of relationship managers to support its small business customers. Along with this, CBA has launched Apple Pay for Business and BizExpress to provide same day decisions on the small business loans.

In Institutional Banking and Markets (IB&M), CBA reported income of $2,444 million and NPAT of $1,071 million, both down by 8% on pcp, mainly driven by lower lending volumes and markets income as well as lower collective and individual provisions.

ASB, a bank owned by Commonwealth Bank of Australia, has reported a statutory net profit after taxation (NPAT) of $1,274 million in FY19, representing a growth of 8% on pcp. During FY19, ASBâs cash NPAT decreased by 4% on pcp and cash net interest margin decreased by 3 bps on pcp.

The Royal Commission highlighted various shortcomings of the bank, which impacted its relationship with its customers. In 2019 Annual Report, CBA has assured that it is committed to providing exceptional service across all the channels, which its customers use to do their banking, including maintaining the largest branch network in Australia and CBAâs Australia-based call centres.

CBAâs mobile banking app was recently rated number 1 in Australia for the third year in a row by Forrester, and CBA has also been rated the best online bank for 10 years in a row by Canstar.

During FY19, CBA welcomed seven new appointments, bringing a strong mix of local and global experience across banking, risk, digital transformation, and leadership of cultural change. CBA believes that securing the best executive talent and capability is critical to the execution of the groupâs strategy. For FY2020, the bank has assured that it will monitor and adjust its remuneration policy and frameworks for all employees so that they can meet both the spirit and the requirements of revised regulatory standards and reflect evolving community expectations.

On 7th August 2019, CBA also provided an update on its aligned advice businesses, confirming that it will commence the assisted closure of Financial Wisdom Limited. Recently, CBA received approval from its shareholders for the sale of Count Financial Limited to CountPlus Limited. It is expected that the sale will be completed in October 2019, following which CBA will sell its 35.9% shareholding in CountPlus in an orderly manner subject to market conditions.