Companies are increasingly raising equity to shore up their balance sheets to deal with the effect of coronavirus pandemic on their operations, forcing them to borrow to meet their expenses. Various firms are going for financial arrangements and mitigating actions to manage the cost base and cash flow to equip them with sufficient liquidity. Raising extra cash gives companies a better chance to navigate through the crisis period.

Here are some ASX players that have planned, deferred or were successful in capital raising.

The Company is a metal producer based out of Australia that operates a century mine in Queensland and aims to be amongst top 10 zinc producers in the world.

On 21 April 2020, NCZ updated the market that it had held a capital raising via placement and Entitlement Offer to raise around $51.1 million. NCZ has performed a subscription deal with IGO Limited (ASX:IGO), as per which IGO would be making an investment of $27 million, taking around 18.4 percent interest in NCZ on an after Capital Raising basis. The issue price is $0.15 per share for placement and Entitlement offer both, indicating 19 percent premium to the five days VWAP.

Both the companies would also enter into a strategic association, enabling the joint assessment of opportunities in the current NCZ tenements or other mining assets recognised by New Century’s continuing due diligence plans.

NTU business is concentrated on the development of heavy rare earth projects, particularly the element of dysprosium. The Company seeks to be the next significant dysprosium producer outside China through its flagship project of Browns Range.

NTU has entered into subscription agreements to raise $22 million with various sophisticated investors under a private placement. All subscription shares issued will be fully paid ordinary shares and will be equal in rank to company’s existing quoted shares on issue. 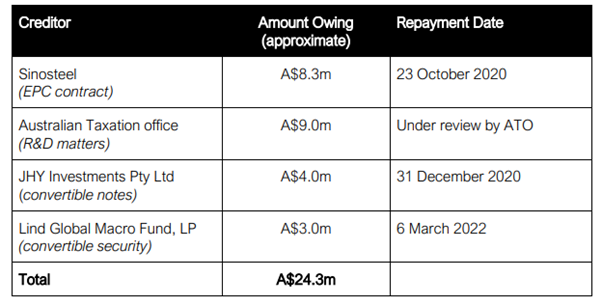 The Company has offered its existing shareholders an opportunity to apply for new shares in the firm by participating in a Share Purchase Plan (SPP). The company plans to raise $5 million through the SPP. The funds raised through the plan will be used for uninterrupted development of the company’s projects and business, for expenditures on care and maintenance of the Browns Range Pilot Plant and for general working capital purposes.

The Company intends to cap the application for new shares under SPP at the statutory maximum allowed of $30,000 per eligible shareholder across all its holdings. The offer price per new share under SPP will be the same as the issue price for the Subscription shares under placement at $0.02 per new share.

NTU has also updated its previous announcement to the $20 million Baogang Placement, originally announced on 15 August 2019, has been prohibited by the Treasurer. Hence, the issue of shares will not continue.

The team remains focussed on adding value to the shareholders despite the latest event to put the Browns Range Pilot Plant Project into both care and maintenance as a result of the coronavirus effect.

Metcash on 21 April notified the market on the conclusion of $300 million Placement of around 107.1 New Shares to investors (institutional) at a price of $2.80/New Share. On 23 April, the New Shares as per the Placement are anticipated to settle, and further be issues and start trading on the Australian Securities Exchange on a normal basis on the next day i.e. 24 April.

As per its trading update on 20 April, MTS is seeking to strengthen its balance sheets and liquidity position. MTS has raised equity ~$330 million that includes $300 million of wholly underwritten institutional placement and a non-underwritten SPP or share purchase plan of nearly $30 million.

The $300 million placement is fully underwritten and is planned to be presented to institutional investors at $2.8 per share. The placement will be conducted on 20 April, and MTS’ shares were to remain in halt till the placement was completed.

The shareholders in Australia and New Zealand will have an opportunity to apply for up to $30,000 of new fully paid ordinary shares free of any brokerage, commission and transaction costs. The price paid by eligible shareholders for SPP shares will be lower of the placement price, and a 2.5% discount to the VWAP of Metcash shares up to and including the closing date of SPP which is expected to be 15 May 2020.

MTS expects that the equity raising along with new debt facilities will provide it with the needed flexibility during uncertainty due to COVID-19.

Dow is an integrated services firm in Australia and New Zealand that designs, builds and withstands assets, infrastructure and facilities.

On 20 April, DOW announced that it had entered into $500 million Syndicated Bank Facility. The facility aims to refinance Downer’s $200 million that matures in April 2020 and give an additional facility of $300 million. The new facility is a committed revolving maturity to mature on July 2022.

The Group has also reached an agreement with lenders to lengthen the 12- month maturity of $130 million of bilateral debt facilities to 2022 and 2023.

Downer has appreciated the support of long-term relationship banks to provide the new facility. The capital raising will boost the liquidity position and financial strength and flexibility of the Group, as per Michael Ferguson, CFO of Downer.

CRL focusses on high-grade graphite to supply global markets. The Company is engaged in various explorations and projects development.

On 16 April, CRL has successfully closed placement of $650,000 at $0.01 per share with a free option on each share issued to support the acquisition of the Barraba Copper Project in New South Wales and initial project works. A part of the placement was planned to be conducted under the firm’s current placement capacity with the balance 11,000,0000 shares to be issued after the shareholder’s approval. The capital raise has replaced the earlier raising announcement at $0.025 per share has now been withdrawn.

The Barraba project has been completed under amended terms which include a decrease of $450 k to $200k. The Company has a strong outlook for copper once the coronavirus crisis is over.

Hence, as COVID-19 persists to spread creating worldwide lockdowns, companies are bracing up to an uncertain fund-raising atmosphere for liquidity needs.