Can stock markets indicate political transitions? S&P500, ASX200 and debate around the presidency

Political transitions have a profound effect on stock markets. A new government always gives a ray of optimism that reflects in the market performance. It has been observed that stock markets perform better after polling day.

During the May 2019 election, when Scott Morrison from the conservative party was announced Prime Minister, a significant upsurge was noticed immediately. The ASX 200 was up 5.13%, eight weeks after the announcement. 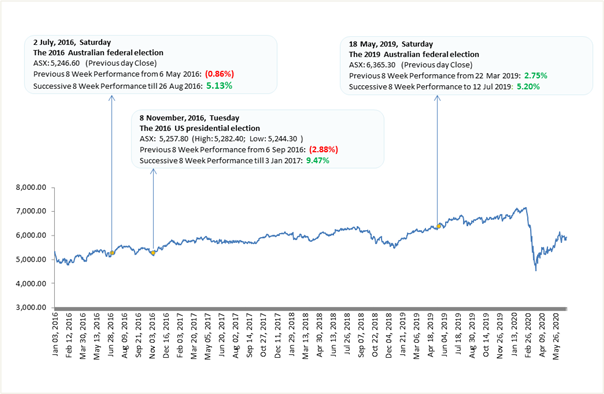 During the 2016 US elections, the traders were not in favour of the Trump government. As the day of vote count approached, indices and stock futures all headed for a steep decline with people investing in safe assets such as Japanese yen and gold.

ASX stocks showed a decline in all major sectors except Gold stocks which experienced a sharp surge. The Australian dollar declined by 2% to 76.1 US cents and fell by 4.9% to 77 yen. Australian miners were apprehensive regarding the future economic growth with shares of BHP Billiton and Rio Tinto falling. The financial sector also recorded a decline in prices with stock prices of all major banks down by almost 2%.

However, if you look at the S&P ASX 200 performance, the stock market took an upward journey since then and hit an all-time high in February 2020.

Impending US elections and its effect on ASX and S&P

The 2016 US election is a live example of how presidential elections can affect the stock market.

On 3 November 2020, the United States presidential election will be held in which the Republican candidate and current President Donald J. Trump will be standing for re-election. The coronavirus pandemic has affected the US the most with President Trump struggling to turn the economy towards recovery. Relations with China are also at their worst with the US president asking American companies to break ties with China. China and the US share a crucial bilateral trade relationship. The falling relation is hurting businesses across the US, already affected by the supply-chain glitch.

Since the 2016 federal election, if one looks at the performance of S&P 500 (NYSE:SPX), the growth of the index has been significant, demonstrating the policies of Trump Government being pro-economic. In the election year already affected by the COVID-19 pandemic, Trump is expected to bolster the US economy and the stock market, to increase his chances of re-electing.

However, social security is a point of concern with democrat candidate Joe Biden focusing heavily on ending gun violence along with other proposals, including a US$15 minimum wage proposal and a major infrastructure overhaul.

The ongoing voting poll by FT draws a gloomy picture for Trump. As per the polls, democrats are outperforming. However, it is difficult to base any hope on poll results as had that been the case, Hillary Clinton would have won the presidency. The 2016 election results did not follow the voting polls, and Trump emerged as the winner.

Regarding the 2020 election, Donald Trump thinks that it is expected to be the most rigged election in the history of United States because of the rise in use of mail-in ballots as people may not prefer voting in person. He also thinks that the mail-in-ballot system can be easily manipulated to defeat him.

According to pollsters and political commentators, urban educators will prefer using the mail-in-ballot system to avoid voting in person in fear of catching the virus. The urban population prefers the democrats more. Trump’s supporters are mostly from the sub-urban population who are less educated and may choose to vote in person as they are less sceptical of the virus.

How the election will fare remains unknown. However, given that the ASX generally follows the US stock market, if the general elections results bring in more gains for the United States, the probability of ASX following the gains will be high.