Australian small-cap exploration company AusQuest Limited (ASX: AQD), is focussed on exploring copper, gold and other base metals within Australia and Peru with most projects being funded under a Strategic Alliance Agreement with South32 Limited.

During the last quarter, the company’s exploration activities were focused on completing the permitting process for Stage 2 drilling at the Cerro de Fierro IOCG Project, located in southern Peru ~140km south of the Mina Justa Cu deposit. AusQuest Limited was also focused on identifying potential drill targets at the Parcoy Copper Project in southern Peru.

In Australia, the company’s efforts during the quarter were focussed on completing target drilling at the Hamilton (Queensland) and Telegraph prospects (Westen Australia), also under the Company’s Strategic Alliance Agreement (SAA) with South32.

Last quarter, the company made substantial progress in relation to the development of its projects in Australia and Peru.

Recently on 28 October 2019, the company announced that it has commenced the access and site preparation work for the upcoming drilling programs in Australia and Peru.

The company has scheduled a program comprising six Reverse Circulation (RC) drill-holes for ~1,600m to be undertaken at the Telegraph Prospect at Balladonia, in the Fraser Range area of Western Australia. With all access approvals already obtained, the company is ready to commence this program in the second half of November. 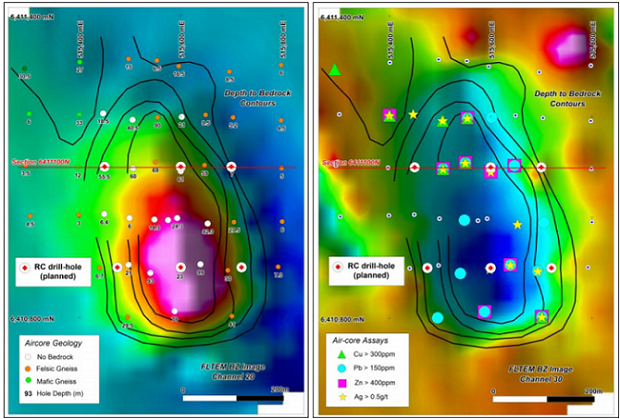 At the Cerro de Fierro Copper Prospect, the company expects to commence a second round of diamond drilling comprising four drill-holes for ~2,400m in the second half of November 2019. A drilling contract has already been signed with AK Drilling International S.A., and camp / access preparations have been initiated.

From this drilling, the company expects to test for extensions to the copper-gold mineralisation intersected previously in drill-holes CDFDD03, CDFDD06 and CDFDD02, as well as testing new areas of interest with similar geophysical, geochemical and geological indicators.

It is to be noted that both of these programs are being funded under the Company’s Strategic Alliance Agreement (SAA) with South32.

“These projects represent potential company-makers for AusQuest, and we are excited about what the upcoming drilling programs could deliver”

To undertake exploration programs on the Company’s 100% owned properties, and to identify and investigate new acquisition and exploration opportunities both in Australia and Peru, the company is raising up to $2.4 million via a Placement ($0.5 million) and Rights Issue to shareholders (~$1.9 million).

AusQuest has secured firm commitments to raise up to $0.5 million via a placement of up to ~35,714,286 fully paid ordinary shares at an issue price of A$0.014 per share to qualified sophisticated and professional investors, with each share having a free attaching option.

In addition to this, the company intends to undertake a 1 for 4 pro-rata rights offer to the company’s eligible shareholders on the same terms, including the issue price of $0.014 per share and with each new share issued having attached a New Option, to raise around $1.9 million. The company has already issued a Prospectus for the same.

AusQuest’s largest shareholder, Chrysalis Investments Pty Ltd (22.7% holding), has indicated that it proposes to subscribe for its full entitlement under the Rights Offer.

The company intends to continue pursuing new opportunities in base metals, both within Australia and offshore. The company has finalized the agreements with Native Title owners over the Paterson Range tenement applications. It now expects the grant of the titles before the end of 2019, allowing early-stage exploration work to commence shortly thereafter.