Economics is the discipline within the social sciences that can have multiple definitions. It studies the consumption, distribution and production of goods and services in human society. Besides this, it helps humans take different economic decisions in the face of scarcity. The economics is all about weighing multiple alternatives available to the individuals while taking a decision. 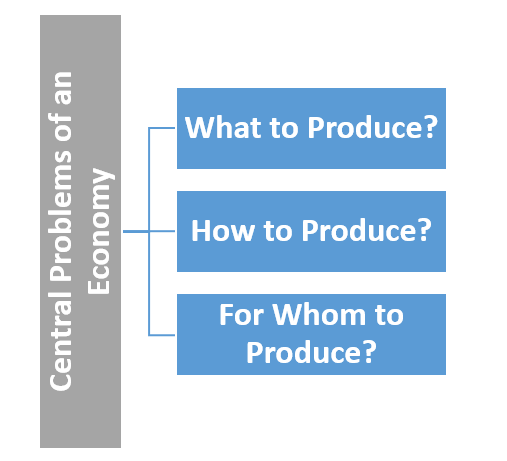 There are three central problems that are experienced by every country’s economy:

The scarcity of water resource has been identified as a major concern in Australia. The sources of fresh and clean water are increasingly becoming scarce in the country due to population growth and economic development. In some cities of Australia, water restrictions have been imposed by the government in order to prevent the exploitation of the resource.

The field of economics can be diversified into Microeconomics and Macroeconomics. Let us study more about these categories below:

It is the study of an economic behaviour of individual agents within the economy like workers, businesses, firms, households etc. The study is concerned with the interaction of demand and supply in individual markets for goods and services.

In context of the Australian economy, an improvement in the performance of S&P/ASX 200 index in 2019 has impacted the individual investors’ decisions of investment in the equity market. All these individual decisions are made on a microeconomic front, that when aggregated affect the economy as a whole. Similarly, financial planning by an individual that helps him take prudent financial decisions for the businesses also comes under the microeconomic category. The retirement planning choices made by the retirees also fall under this division.

Macroeconomics is the branch of economics where we study an economy as a whole, examining different phenomena like national income, unemployment, inflation etc. The macroeconomic models are used by the government, central banks and organisations to formulate economic policies and strategies.

Let us have a look at some of the recent updates on macroeconomic indicators of the Australian economy:

The headline consumer price index (CPI) stood flat at 0 per cent in March 2019 quarter, as reported the Australian Bureau of Statistics (ABS) in April this year. However, the CPI rose 0.5 per cent in the December 2018 quarter. The inflation data missed estimates during the quarter and raised speculations of an interest rate cut back then by the RBA (Reserve Bank of Australia). 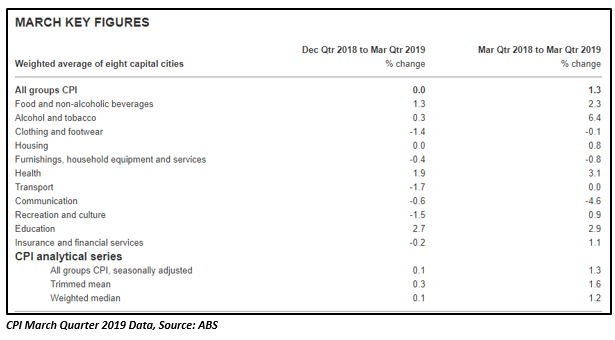 The growth across the Australian economy dropped to a historic low level of 1.8 per cent (Mar Qtr 2018 to Mar Qtr 2019) in March 2019 quarter, declared ABS. It was the weakest such level witnessed since the global financial crisis. However, the Australian economy grew by 0.4% (seasonally adjusted) during the March quarter in chain volume terms relative to December 2018 quarter. The government final consumption expenditure and net exports contributed 0.2 percentage points each to GDP growth. 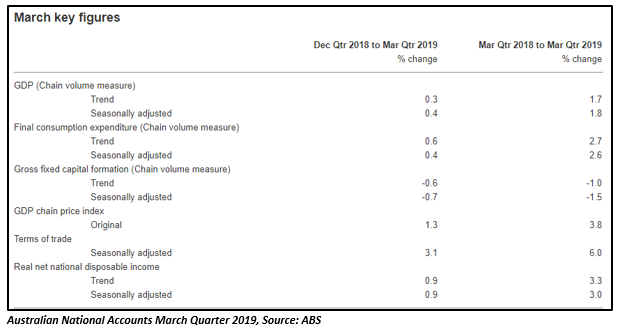 Unemployment Rate: The unemployment rate is a critical measure of the economy’s state as it has a strong impact on the economy as a whole. If people lose their job, the production of goods and services gets affected that further causes loss to the nation’s income.

The number of job vacancies rose by 0.3 per cent in Australia over the May 2019 quarter, indicates a new ABS release. The initial job vacancies figure was in line with the recent slowing in other economic indicators.

Retail Turnover: The retail sales elicit positive movements in equity markets as it is a good indicator of the pulse of the economy. If the retail sales are high, the shareholders of retail companies benefit with higher earnings. In contrast, lower retail sales signal a slowdown in an economy.

A recent ABS update suggests that the retail turnover in Australia improved 0.1 per cent in May 2019 in seasonally adjusted terms. The rise was supported by stronger spending in Cafes and restaurants (0.7%) and household goods retailing (0.5%).

Following a rate cut of 25 basis points in June this year, the RBA slashed the interest rates to 1 per cent last week amid weak unemployment level and wage growth in Australia. This was the first time after 2012 that the rates have been reduced in two successive months. The rate cut was done to support employment growth and make inflation target achievable.