A biopharmaceutical company headquartered in Australia, Neuren Pharmaceuticals Limited (ASX: NEU) is engaged in the development of new therapies for neurodevelopmental disorders with a high unmet need, characterised by impaired connections and signalling between brain cells.

Trofinetide (the leading drug candidate of Neuren, also known as NNZ-2566) is licensed to ACADIA Pharmaceuticals by Neuren for its development and commercialization in North America while Neuren retains all rights of the product outside North America. The company is also advancing the development of its second drug candidate NNZ-2591 which has shown positive results in models (prec-clinical) of several disorders, including Phelan-McDermid syndrome, traumatic brain injury, Fragile X syndrome, Parkinson’s disease and many more.

Neuren believes that Angelman syndrome (AS) as well as Pitt Hopkins syndrome (PTHS) meet the criteria for Orphan Drug designation.

Neuren entered into a partnership with ACADIA Pharmaceuticals in August 2018 through which it secured significant funding and additional capabilities required to bring trofinetide to the United States market. The company received funds of $13.5 million as the first payment, which enabled it to advance NNZ-2591 as quickly as possible to clinical trials. The company has also received commitment from ACADIA of ~A$77 million investment in Rett Syndrome Phase 3.

For NNZ-2591, the company aims to file an Investigational New Drug application with the FDA and initiate the clinical trials in 2020.

According to the recently announced Annual Report 2018, Neuren ended 2018 in a much stronger financial position following the ACADIA partnership. For the year ended 31st December 2018, the company had cash reserves of $23.6 million in comparison to the $4.7 million cash reserves in the prior year. The cash inflow from operations and financing amounted to $6.4 million and $11.7 million, respectively during the period. The company sustained its annual profit (after tax) at ~$3 million. 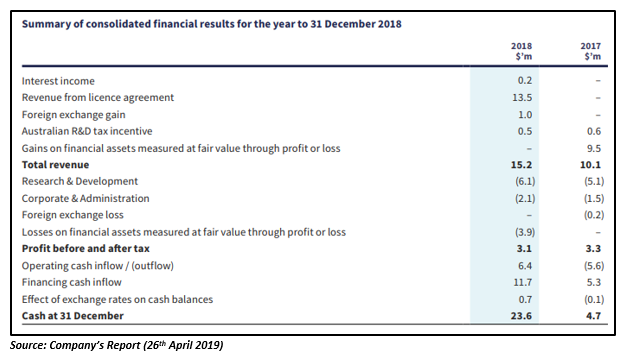