Lynas is among the very few REE producers who have established operations outside China, which is currently the largest exporter of Rare earths. Recently, when China threatened US to use their dominance in the Rare earth space to have the upper hand in the current US-China trade war, it opened a gateway of opportunities for rare earths companies outside China. Due to this, many investors are keeping a close on Lynas and its activities. Below are the five major reasons why one must look at Lynas.

On 6 September 2019, Lynas announced that it has signed an MOU (Memorandum of Understanding) with the City of Kalgoorlie-Boulder to perform due diligence on potential sites for the company’s new Cracking & Leaching plant, a positive step forward in the development of Kalgoorlie-Boulder as a downstream processing hub.

Following the release of this news, LYC’s stock witnessed an uplift of 2.893% during the intraday trade.

Known as the “gold capital of Australia”, the City of Kalgoorlie-Boulder has good access to infrastructure and a skilled workforce, making it an attractive investment destination for Lynas.

The framework of MOU will make sure that the new Lynas Cracking & Leaching plant in Western Australia is successful and it will be focused on key relevant areas including land availability, water, gas, access roads, electricity, other infrastructure and workforce management.

Despite facing challenging conditions, Lynas was able to produce a strong financial performance in FY19. During the year, the company witnessed record total REO production of 19,737 tonnes as well as record NdPr production of 5,898 tonnes. In FY19, the company recorded a net profit after tax of $80.0 million, representing the second consecutive annual net profit for the Rare Earths Group. During the year, the company increased its investment in R&D with a key focus on producing higher quality, higher priced Ce and La materials.

Currently, Lynas is uniquely positioned as the only significant Rare Earths producer outside China. US-China trade tensions have led to concerns about the security of supply and single sourcing. Recently US Department of Defense (DOD) also showed concern regarding the supply of REE. In order to protect themselves from any fragility in the REE supply chain, DOD is looking towards Australia for fulfilling their REE needs. DOD is already in talks with Australia for a processing facility.

These trade tensions have brought Rare Earths back into the spotlight have developed a renewed interest in Lynas as a secure and sustainable supplier.

Lynas is primarily focused on serving customer demand and supporting the development of the market outside China. Demand in these markets remains strong and Lynas is making excellent progress towards its objective of selling all production to outside China markets.

Due to the increasing applications of REE, the demand for REE is expected to rise in the near term.

Uses of REEs include:

Lynas has estimated that Neodymium and praseodymium (NdPr) demand will accelerate from 2021 with the launch of most new EV models (refer to the graph below). Lynas is well positioned to serve this growing demand. 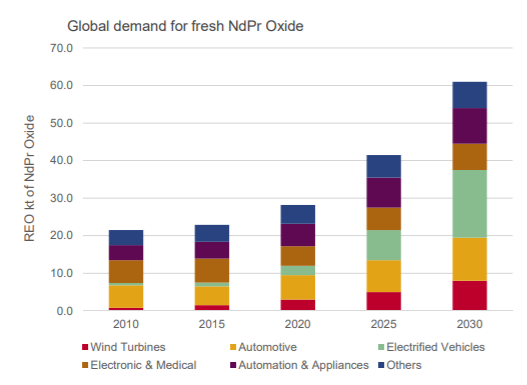 On May 21, 2019, the group announced its Lynas 2025 Growth Plan. The key elements of the Lynas 2025 Growth Plan include expanding production capacity to 10,500mt per annum of NdPr products, relocating cracking and leaching operations to Western Australia and the proposed establishment of heavy rare earths separation capability in the United States of America via the proposed Joint Venture with Blue Line Corporation.

Right now, Lynas is uniquely positioned as the only significant rest of world Rare Earths miner and producer with World-leading Rare Earths deposit at Mt Weld and strategic customer relationships in key markets.