Norway, Iceland, Sweden, Germany, what do they have in common? Yes, they are European nations, but they also have some of the highest EV adoption rates globally. In fact, the Europe Union is among the largest market of electric vehicles after China in sales. The increasing EV adoption rates in the European market requires the expansion of Lithium based battery pack manufacturing capacity. The resources companies catering to this budding sector are under market participants focus.

Vulcan Energy Resources (ASX:VUL), is a junior exploration company is currently involved in exploration and development of battery metals project in Germany and Norway.

The Vulcan Insheim Lithium project is located in the Upper Rhine Valley in Southwest Germany, in operational proximities to -Wolfsburg, the car capital of Germany, Volkswagen-Northvolt JV proposed mega battery plant, and the much-awaited, Tesla's Gigafactory. 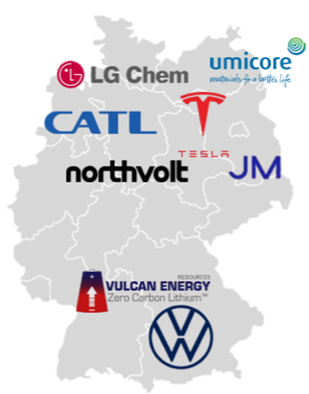 The operational proximities to car and battery manufacturers will result in cost savings, better supply chain and logistics for the manufacturing of battery.

Total indicated Mineral Resource of 722,000 tonnes of LCE (Lithium Carbonate Equivalent) was reported for the Insheim license, with the Lithium grade of 181 mg/litre. The resources have been defined at a cut off grade of 100 mg/litre.

APEX Geoscience carried out the JORC 2012 code-compliant resource estimation on behalf of Vulcan. The Group total indicated & Inferred Mineral Resources is the largest in Europe at 13.95 Mt LCE from 2 of 6 licenses.

We currently are in the initial phase of the EV adoption; Alike any major technological advancement EV sales will undergo an accelerated growth (S Curve) once it reaches the inflection point with the total cost of ownership (TCO) of an EV, determining the timing of the inflection point. The OEMs would require an uninterrupted additional supply for battery materials such as Lithium, Nickel, Cobalt Graphite to feed the increasing demand.

Currently, there is ambiguity over the future supply of high battery-grade Lithium. The current supply of Lithium comes mostly from Spodumene and Hard rock assets in Australia and South America. There has been rising civil protests against the overuse or environmental violations by the brine-based operations in South America.

Vulcan Insheim Lithium project might be an innovative solution to the above issues and aims to become the World's first Zero Carbon Lithium™ producer.

The Insheim license is located 19 kilometres and stretches over 80,719 hectares within the Permo-Triassic strata aquifer domain. The Insheim property is strategically located at the heart of Europe's automotive and Lithium battery industry. A three-dimensional subsurface stratigraphic model was created using the 7 cross-sectional slices as per the current understanding of the geology. 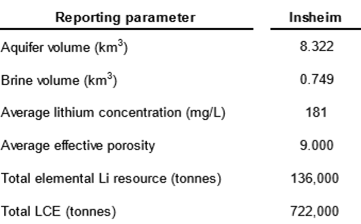 The geological data of the Permo-Triassic aquifer domain, average porosity, pore space percentage and the aquifer volume was used to estimate the Insheim license brine volume. The estimations from the recently published Mannheim, Taro, Ludwig and Rheinaue Exploration Licences remain unchanged and might be explored and reviewed upon in future.

Vulcan and the German Pfalzwerke Geofuture GmBH signed a MoU to access the lithium-rich brine from the Insheim exploration license and the operational Insheim Geothermal power plant. The current operations are focused on the power generation, and no lithium extraction operations are ongoing.

The Insheim geothermal plant extracts the hot (~165oC) Lithium enriched brine from aquifers depth (>2,980 metres) and reinjects the brine back into the reservoir. The MoU provides VUL with the access to Lithium rich brine and data during the initial collaboration period, before moving to the setting up of refinement plant infrastructure at the mine site.

The Geothermal power plant operates at the 70 litres per second and at the in-situ reservoir pressure conditions, no gas is dissolved in the brine solution that has not transformed to CO2.

The early access to the brine also boosts up the confidence in the potential mineral resource of the Insheim license. 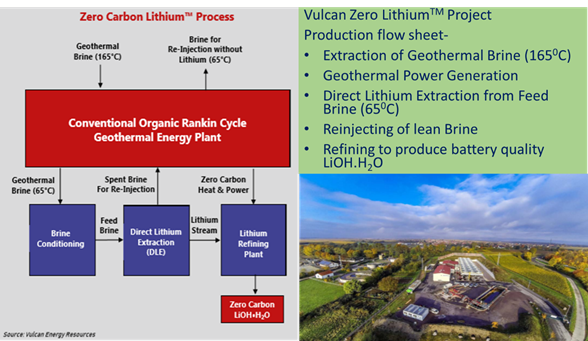 The Indicated mineral resources have been estimated as per the geological data from the brine aquifer, and Vulcan would continue to expand its mineral resources by further working on the exploration targets. The currently operational Insheim power plant will provide the bulk brine samples for metallurgical testwork for the extraction of Lithium.

The future work would also include the collection of brine samples, metallurgical recovery testwork, seismic data acquisition and processing, and further geochemical sampling from wells in the region. The scoping study is scheduled to be completed by in Q1, 2020 and commence production from 2023.

ASX Gives a Big Thumbs Up

On 20 January 2020, post this announcement VUL shares surged up by over 15% to close at $0.185. The stock market participants seem to have confidence in the exploration results as the shares further continued to rise and are currently trading close 52 week high at $0.220 as on 23 January 2020.