In a remarkable development, gold explorer Kingwest Resources Limited (ASX:KWR) has released its quarterly report for the period ended 31st March 2020 on the ASX. The Company continued with exploration drilling activities at its flagship Menzies Gold Project (MGP) during the period, attaining several milestones in line with the development of the project.

Let us take a closer look at key operational activities conducted at Menzies during the quarter:

The results that validated continuation of high-grade mineralisation at the lowest levels of these underground workings included:

The Company announced updated Mineral Resource Estimates (MRE’s) for Selkirk, Warrior, Pericles and Lady Harriet-Bellenger prospects at Menzies. This resulted in a significant increase in Menzies near surface MRE’s to 233,300 ounces, taking Menzies and Goongarrie combined MRE’s to over 250,000 ounces.

The table below demonstrates new estimates derived at different prospects at Menzies: 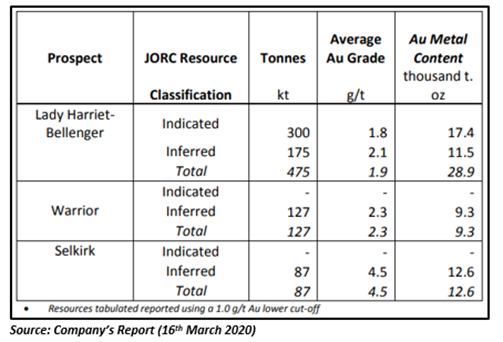 It is worth mentioning that Menzies near-surface MRE’s have continued to increase from 171,000 ounces in December 2019, 208,000 ounces in February 2020 to 233,000 ounces in March 2020. The Company expects a further increase in its MRE’s resulting from ongoing exploration drilling activities.

The Company delineated exploration targets at its three main mineralised systems at Menzies during the quarter, which are being tested under its initial RC and Diamond core (DD) drilling programme continuing at the project.

Since the commencement of drilling in 2020, Kingwest has completed 14 RC pre-collars and 10 RC drill-holes for 3,402 metres at Menzies, focussing on three Exploration Target areas (as discussed above). It is important to note that the Company is pursuing with diamond drilling to test high-grade gold targets and extend these 14 RC pre-collars, while 10 RC drill-holes would not have diamond core tails.

The 14 pre-collars that are being drilled for diamond core extensions focus on two of the Exploration Targets within the MGP (Yunndaga and Lady Shenton); however, the third target (First Hit) was tested with only RC drill-holes.

The results obtained so far from the 2020 RC drill program validate the high-grade characteristic of the mineralisation at Menzies, which include:

Notably, the Company has also discovered a new lode further to the west of the Stirling lode, sub-parallel to the lodes hosting the proven, high-quality Lady Shenton deposit.

In the wake of strong drilling results from the Menzies project, the Company also sold some of its non-core exploration tenure around Leonora subsequent to the end of the March Quarter, which includes:

The Company applied for a 100 per cent interest in around 6km of prospective tenure within Menzies Mineralised Corridor, with the similar geology as hosting considerable historical production and exploration success as the MGP and also with historical underground mining.

The Company notified that substantial transported sand cover extends over the weathered in-situ geology and the bedrock in areas of the MGP, which lowers the success of historical prospecting and exploration. The Company believes it is ideally positioned to drill test the mineralised strike extent.

On the financial front, the Company completed a $3,500,000 (before costs) Placement during the quarter via the issue of ~21 million ordinary shares at $0.165 per share. The Company intends to use the funds raised from the Placement to fund exploration drilling activities at Menzies targeting high-grade extensions to the current known mineralisation.

Kingwest’s exploration progress at Menzies during the March 2020 quarter was certainly commendable, supported by strong assays from the RC drilling program. With a cash balance of $3.7 million as on 31st March 2020, the Company seems well placed to continue with further drilling activities at Menzies.