With South Africa running short of available gas, the transition to gas to power has become increasingly important to meet the regional power needs.

Zimbabwe can be serviced through small scale LNG trucked to large off-grid mining operations to replace diesel fired power generation, at the back of a pro-business government that has been promoting foreign investment and has implemented investor friendly reforms.

Consequently, the region has been garnering attention from oil and gas exploration companies as it is relatively industrialised compared to majority of African countries and has large local demand for gas.

Leveraging from this opportunity is an independent oil and gas exploration company, Invictus Energy Limited (ASX:IVZ) - a first mover to secure the best acreage, best terms and most lucrative markets in Zimbabwe. The Company has been advancing the Cabora Bassa Project within the Cabora Bassa Basin in Zimbabwe and has recently signed a binding share subscription agreement to further advance the Project.

The Company has entered into a binding share subscription agreement with the Mangwana Opportunities Fund, that is granted tax exempt status by the Ministry of Finance and prescribed asset status.

Mangwana Opportunities Fund is managed by Mangwana Capital and funded by Zimbabwean institutional investors including pension funds, with investments majorly in agriculture, mining and tourism fields. An investor owned, closed end investment company, it has a decade long investment horizon.

Below are the placement details-

The condition precedent to the completion of the placement and the subscription agreement remains subject to approval by the Reserve Bank of Zimbabwe Exchange Control and is likely to be received in the near-term.

Why is the Mangwana Opportunities Fund Placement Important?

Inclusion of a strategic Zimbabwe institutional investor like Mangwana is likely to be a beneficial addition to IVZ’s Project development strategy.

The Company notified that funds raised from the placement will be used to advance the Cabora Bassa Project, including preparatory works along with on the ground activity in the project area, while enhancing IVZ’s CSR program within the Muzarabani and Mbire Districts and other in country activities.

Moreover, considering the global market and oil industry environment, securing this funding ensures that the Project spending is unaffected and the Company’s exploration program remains on track.

And there is more!

Along with this agreement, IVZ announced the appointment of Mr Joe Mutizwa, current Chair of Mangwana Capital and a respected Zimbabwean businessperson as the Director of IVZ’s 100% owned local subsidiary, Invictus Energy Resources Zimbabwe Pty Ltd. 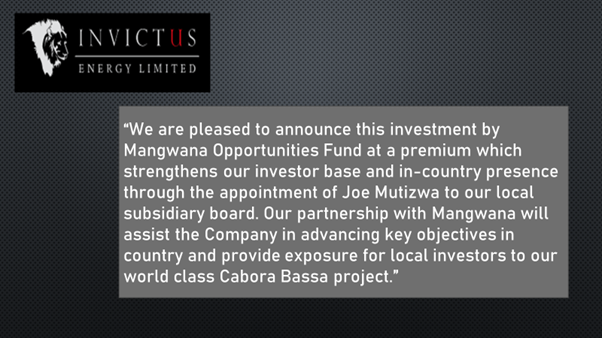 A well experienced and highly qualified personnel, Mr Mutizwa served as Chief Executive of Delta Corporation, one of Zimbabwe`s largest listed companies for a decade. He retired in 2012 and currently sits on the Presidential Advisory Council (PAC) which is a body appointed by His Excellency CDE E.D Mnangagwa, Zimbabwe’s President, to advise and assist him in formulating key economic policies and strategies in the country. Experts and leaders for the body are drawn from diverse sectors.

On the qualification front, Mr Mutizwa holds a BSc degree from The London School of Economics (first class honours) and an MBA from the University of Zimbabwe. He also has an MSc from HEC – Paris and Oxford University.

Commenting as Chairman of Mangwana Capital and incoming director of wholly owned subsidiary Invictus Energy Resources Zimbabwe, Mr Mutizwa stated that IVZ’s Cabora Bassa project in Muzarabani is a potential game changer for the country with the potential to set forth significant economic benefits and energy security to the entire region. Moreover, Mangwana looks forward to supporting IVZ to achieve their goals in Zimbabwe.

Given the current turmoil in the global market and oil industry environment, IVZ’s Board and Management have focused on reducing costs within its control, with cuts made in various categories of its corporate costs in Australia from its already low overheads.

Effective 1 April 2020, the Board and Management have also agreed for a slash in their annual fees and remuneration by 25-50%.

The Board believes that IVZ’s cost base is now at a more appropriate level for the current circumstances and considers the Company to be fully funded to deliver a farmout of SG 4571, a process that remains in progress to select a partner to participate in high impact basin.

It should be noted that the process has garnered interest from a wide variety of Exploration and Production companies and Private Equity players focused on upstream investments. Notably, the opportunity has passed the technical evaluation stage for a number of companies, with commercial evaluation ongoing, as per IVZ’s December 2019 Quarterly Activities Report.