As people’s living standards improve the demand for energy is increasing. Energy requirements are on the rise over the last few decades, mainly due to increased population, improved industrialisation and so on. Developing countries are far ahead in energy demand compared to developed countries. More than 80% of the population in developing countries are still living in rural areas and using traditional methods such as wood for meeting their day to day energy requirements. These sources are not only a major contributor to environmental pollution but are also time-consuming. More and more there is an urgent requirement for affordable, renewable energy sources for economic growth. Solar power may be the answer, with its ubiquitous presence, unbridled potential, mass appeal and potential economies of scale.

According to the International Renewable Energy Agency, the primary focus for solar energy as a long-term source is associated with cost reduction to make it a more competitive choice. It has succeeded to a large degree, by reducing the cost by 73% between 2010-17 and bringing it to levels that are comparable to conventional thermal power. 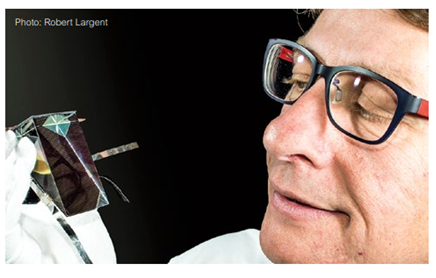 University of Sydney Realises PSC as a Technology Disruptor

What if we say there is a cheaper, yet higher energy conversion rate than current solar cells currently available?

Well! The University of Sydney and others continue to advance ultra-thin, lightweight, and cheap perovskite crystals as a major disruption in the solar energy. They hold the potential to shake up the entire renewable sector. At a time, when solar panels have approached their natural limits, scientists looked towards the metal halide Perovskite to increase the limitations of a solar photovoltaic cells.

“Perovskites are a really promising prospect for solar energy systems,”

Greatcell: The Innovative Pioneer of the PSC Technology

Greatcell Energy Pty Ltd, a top Perovskite firm globally, was formed in 2019 built on the lineage of over 20 years of innovation in producing third-generation solar technologies. Greatcell acquired significant IP assets from the previous entities and currently holds over 20 patents and is also an active member of 3 EU projects. Greatcell is committed to bringing the perovskite technology to the market strategically.

Greatcell plans to tap this business avenue to establish the commercially viable aspect of the standalone Perovskite solar cell modules in the IoT and Micropower market to demonstate the practicality of the technology by the users and the technology watchers.

Greatcell believes that the Micropower and IoT industry would well prepare the firm and the end users for a commercially viable, durable, cheaper, and disruptive technology in solar cell technology.

Independent studies at the world-renowned MIT have backed Greatcell’s strategy, first to establish the product in the market commercially and then address the broader Solar power market. The study justifies that the approach of addressing the micropower and IoT markets substantially reduces the initial investment required for commercial operations. The reduced capital means reduced risk, which in case of a direct entry to the solar power sector would require investments in the range of several million to even billions. The technoeconomic analysis exhibits a viable plan to bring the PSC technology from the labs to a significant position in the global solar market.

Perovskite material has established their presence as an economical, ecofriendly, and abundant option to the conventional silicon-based solar cells. Greatcell plans to address the need of the hour through the IoT & Micropower market, establish the technology between the end users and then go for the broader and bigger solar PV market.