On Friday, yields on the Australian sovereign debt made extreme lows as investors took the flight to safe assets. Fears of subdued demand from China for commodities dragged the prices of major Australian commodities to lower levels.

Friday’s lead from the US markets was not pleasing for Australian markets with Dow Jones Industrial Average losing around 603 points or 2.09 per cent and S&P 500 shedding 1.77 per cent or 58.14 points.

Over the weekend, the Federal Treasurer Josh Frydenberg gave an interview to a TV channel, expressing concerns on the anticipated economic damage due to exogenous shocks.

He noted that the evacuation of Australians, from the coronavirus hit – Wuhan, China, would not cost $1k as announced earlier. What must be jittering the markets could be the Treasurer’s comments on the extent of economic damage.

He added that the coronavirus pandemic could result in a significant damage to the economic activity, adding further pressure to the Commonwealth Government’s budget surplus.

Mr Frydenberg opined that the prospective influences on tourism, education and trade as a result of coronavirus outbreak could be material to the economic growth, and a negative quarter of economic growth could be expected.

Markets, especially sovereign bond markets, are susceptible to the fiscal prudence of any country. And, Mr Frydenberg stated that the fate of the $5 billion forecast budget surplus would be materialised on budget night.

Australian Government had been tackling the wildfires, and packages were announced to compensate the sections of the economy which were facing adverse consequences, and a separate $2 billion would be utilised to revitalise the economy, and lately, the hailstorms in the country had caused some damage as well.

Coronavirus and bushfires are likely to impact the Australian economic output, and the arrivals from China were banned by the Commonwealth Government in a bid to contain the virus.

Mr Frydenberg has speculated a quarter of contraction on the back of dual impact from natural calamities and coronavirus. Media has been contemplating that the ambitious budget surplus forecast of $5 billion may not eventuate.

As a result of bushfires, household consumption could take a hit, which has been lagging in the economic engine of our country already.

Coronavirus could affect the seasonal economic activity generated by the tourism sector of the country as Chinese tourists see their holiday packages smoked in the air due to travel bans.

And, the student admission season is likely to be dampened as well due to the healthcare outbreak. Mr Frydenberg said that Chinese tourism and students contribute in order of over $15 billion to the Australian economy each year.

On 4 February 2020, the Reserve Bank of Australia (RBA) will be holding its monetary policy review. Markets would be eager to hear the stance of the bank at a time when the economic growth prospects appear to be in jeopardy.

While there have been many positives for the Central Bank to keep the interest rates on hold at this meeting, the RBA is likely to reconsider its growth forecast for the Australian economy given the disruptions caused by bushfires and coronavirus.

Although the improvements in the housing, exports, inflation and employment had given hopes that monetary policy adjustment is depicting its early impacts on the economy, whether the momentum is likely to continue through 2020 remains a major concern.

It is being said that, as a result of coronavirus and bushfires, the Central Bank would be re-adjusting its forecast for retail spending, employment, commodity prices, inflation.

What is the situation in China?

According to the latest numbers from Chinese media, the death toll in the country has reached to around 360 with over 17k cases. Coronavirus outbreak has turned out to be more damaging than SARS in 2003 with the death toll surpassing the 2003 healthcare outbreak.

Chinese military has been providing supplies and healthcare support to the households-based in Wuhan, and massive quantities of supplies are being delivered by the troops to the supermarkets.

In Shanghai, the markets opened after an extended break followed by Lunar New Year holiday amid the coronavirus outbreak. SSE Composite Index in the Shanghai Stock Exchange opened around 8.7 per cent lower on this morning.

People’s Bank of China has announced a blockbuster package to deal with the issue and to keep the economy afloat augmented with monetary injections.

It had been reported that the Bank was set to pump in RMB 1.2 trillion into the markets on 3 February 2020 through reverse repo operations in a bid to aid liquidity supply in the system.

And, this was only one of the 30 total measures that have been announced by Chinese authorities to curb potential slowdown due to the coronavirus outbreak in the country.

Uncertainties have been omnipresent this year, and with de-escalation in the US-China trade disputes, the new ones that has ravaged global market sentiments include the US-Iran tensions and now the pandemic coronavirus.

On Friday, the Australian bond markets depicted a risk-averse sentiment, and bond-yields made lows in the markets as the risk of potential economic contraction intensified.

Conversely, the bond markets in the country were somewhat stable today i.e. 3 February 2020, as the RBA delivers monetary policy stance tomorrow on 4 February 2020. On Friday, yields on the sovereign bond markets fell severely.

Gold miners and healthcare companies were among the largest gainers in the S&P/ASX 200 on 3 February 2020. 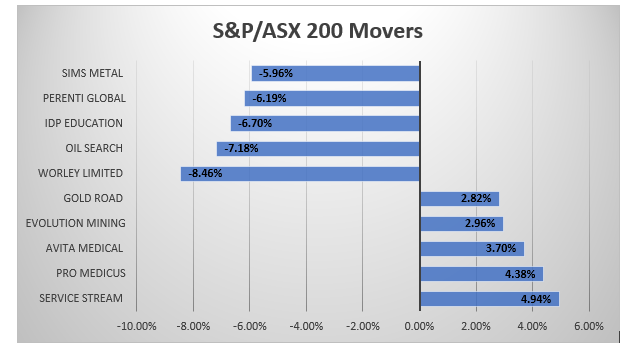