How Is The United States A Significant Contributor In The Recent Oil Spill?

The United States is increasing the number of new-well oil production per rig, which in turn enabling a stronghold of crude for the United States further positioning it in a neck-to-neck situation with the oil producing cartel. As per the data, the new well oil production per rig increased in many states of the U.S., which led to an increase in the number of barrels added to the supply chain per day.

The number of uncompleted drill wells is also increasing in the United States, and energy investors may keep a close eye on the development of these wells. As once completed, it has the potential to act in favour of the U.S. and support high production.

Region-wise breakup of drilled but uncompleted wells (Jan 2014-March 2019) is as follows: 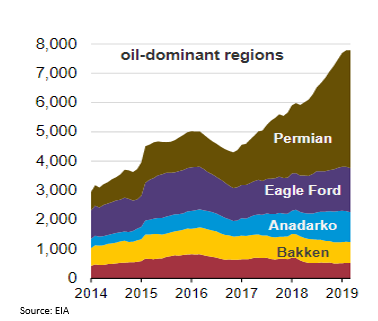 The number of uncompleted drilled wells in the United States marked a decline in March 2019, as compared to February 2019. The decline in such numbers represents the completion of such wells, which in turn, if reduced monthly, could provide ample boost to the crude oil production.

As a result of the boost provided by the production capacity, the inventory in the United States rose significantly in April, which in turn, exerted pressure on crude oil prices. 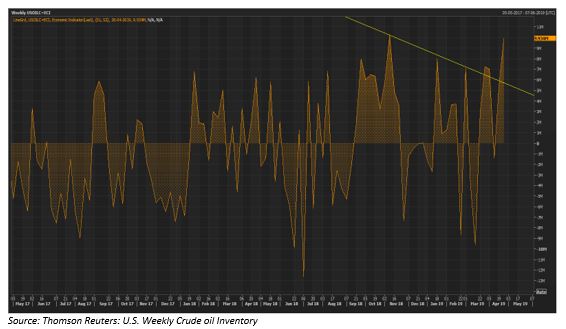 The last but not the least factor contributed by the United States, which caused the oil prices to fall, was the recent tweet from the U.S. president Donald Trump. The president has mentioned that he intends to increase the tariff on China from the current 10% to 25%, which in turn, jeopardized the progressive trade-talks. The earlier progressive trade talks supported the recovery in the global economic conditions, however the estimation that China might retaliate again questioned the positive outlook on the global economy; which in turn, hampered the oil demand and exerted substantial pressure on the prices.