Gold prices are moving up in the international market, and simultaneously copper prices are falling, which in turn, is creating a balance for copper and gold mining companies.

The escalation of the bilateral disagreement of the United States with China is supporting the gold prices as it is inducing doubt among the market participants over the global slowdown; and, the same pessimism is exerting pressure on metals used in a thriving economy such as copper.

With such a negative correlation, the mixed commodity prices are relatively creating a suitable balance for the miners of both copper and gold.

China and Base Metals Scenario:

Despite the backdrop from the U.S-China trade war, China is constantly improving the infrastructure activities and building new houses, which in turn, is currently providing impetus to ferrous metals; however, the hike in ferrous demand is supporting the prices of non-ferrous base metals such as copper as well. The prices felt pressure over the looming global economic condition, which as per the market, is expected to recover as the U.S-China trade war did not result in no further tariff hikes, and the United States did not increase tariff on Mexico.

On the other hand, the escalation which led to the surge in gold could face a halt if the development activities in china surges and global economic figures improves, and investors should keep a close eye over the counter.

Gold and Copper Miners on ASX:

RXL is a multi-commodity miner on the Australian Securities Exchange, and the business portfolio of the company contains project such as Nickel Mineral Resource, Collurabbie, and Mt Fisher.

In an announcement made public by the company on 13th June 2019; RXL presented the report published by Venus Metals (ASX: VMC), a company with which RXL is in a Joint Venture of Currans Find.

The Joint Venture of the company showed potential and returned significant intersections from Currans Find North and Red White and Blue Workings, where the company targeted shallow high-grade gold mineralisation beneath the historical workings through the initial reverse circulation drilling, which comprised of 25 holes, which accounted for 1,208m.

The initial drilling also marked the activity at Taylor’s Reef, and it also identified down-plunge extensions, which the company further plans to test by follow-up drilling. 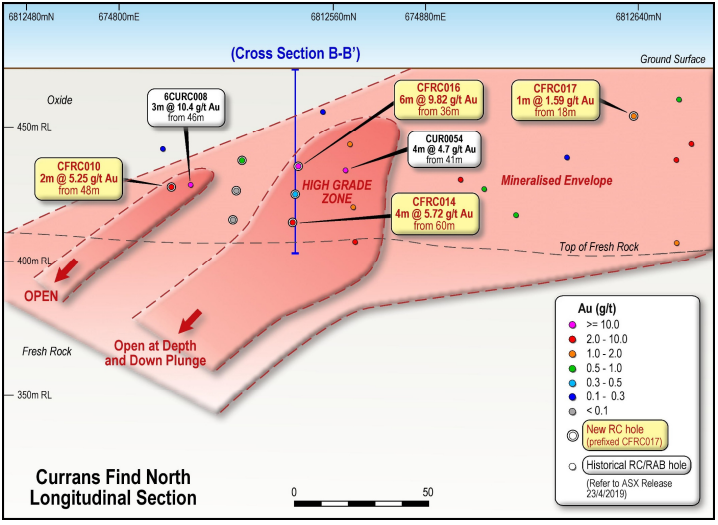 Drilling results from Red White and Blue Reefs are as:

The above correlation suggests that the shares of the company takes a price change from the movement in both copper and gold. However, the accumulative movement of the share price takes into many factors into consideration apart from just the commodity prices.

However, we can see that the shares of the company are relatively stable than the movement of both gold and copper, which in turn, suggests that multi-commodity stocks could absorb the price shock of inversely related commodities.

In an announcement made public by the company on 11th June 2019; HLX reported an interim maiden Indicated and Inferred Mineral Resource estimates for the Central Zone of its copper-zinc project- Collerina deposit in Central New South Wales.

The company reported a fresh Indicated Resource of 0.83 million tonnes with 2.6 per cent copper, 0.2 parts per million gold, and the resources would account for 21,800 tonnes of copper and 6,600 ounces of gold.

The fresh Inferred Resources were 0.57 million tonnes with 2.5 per cent copper, 0.1 parts per million gold, and the resources would account for 14,100 tonnes of copper and 2,500 ounces of gold.

With the increased resources at the prospect, the total Indicated Resources now stands at 2.02 million tonnes with an average grade of 2.03 per cent copper and 0.1 parts per million of gold, which would account for 40,400 tonnes of copper and 9,400 ounces of gold. 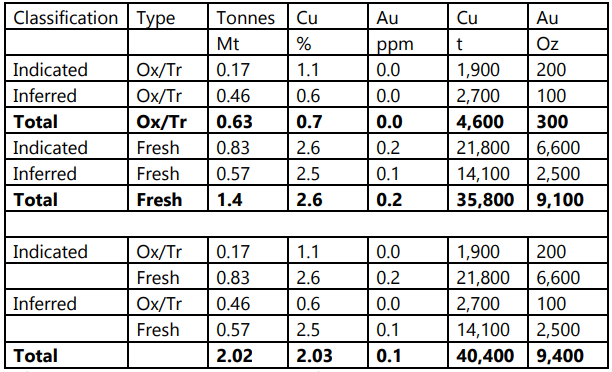 The above chart suggest that the company takes into considerations the movement of both copper and gold along with other factors such as fundamentals and events.

The company presented a review report on 11th June 2019 in which the company mentioned that it has been compiling the historical data across its Tverfijellet and Undal Projects for delineating drilling targets in Norway.

As per the company, the historical mine production for an underground mine yielded a grade of 1.15 per cent copper. 1.86 per cent zinc, 43.2 per cent iron and 41.4 per cent Sulphur. The Sulphur deposit of the prospect composition is similar to the deposit of Tverfijellet deposit.

The review confirmed that the copper-zinc prospectivity is high in the Norway project of the company and KRX further intends to identify drilling target, which could further increase the mineral resources and ore reserves of the company.

The chart above suggests that the share price considers copper price more prominently than gold.

Caravel Minerals Limited (ASX: CVV) is an Australian Securities Exchange listed junior explorer, and the product portfolio of the company includes copper, gold, molybdenum and other base metals. Caravel’s host two main deposit, which goes by the name of Bindi and Dasher, at its flagship copper project- Caravel Copper Project.

In its latest update on 11th June, the company mentioned that the initial copper concentrate specifications at its flagship Caravel Copper Project were considerable, which further signifies that the project contains a very clean product with a low level of impurities. CVV completed the drilling at the prospect recently.

As per the company, its low impurity product would be a sought-after product by copper smelters as they seek clean concentrate to blend with complex concentrate, which contains impurities above the threshold level. The low impurity of the product at the prospect and its specifications could provide the company and high-edge if copper demand prevails in the international market.

The product specifications are as follows: 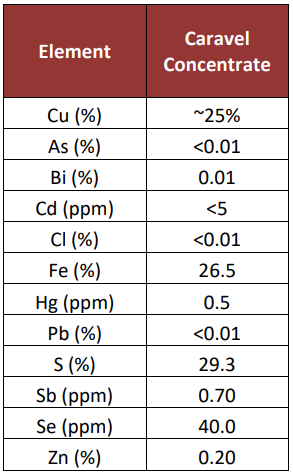 The above chart suggest that the company takes into considerations the movement of both copper and gold along with other factors such as fundamentals and events, and inclusion of multi-commodity stocks could mitigate the volatility risk.