Australiaâs financial sector, dominated by the âbig fourâ banks namely, Westpac Banking Corporation (ASX: WBC), Australia and New Zealand Banking Group Limited (ASX: ANZ), Commonwealth Bank of Australia (ASX: CBA) and National Australia Bank Limited (ASX: NAB). The sector has been a major contributor to the countryâs economic growth, being an important player in adding to Australiaâs GDP. With a large and profitable space dominated by four major banks and a strong regulatory system, Australia is expected to see continued contribution to the economy from the financial sector in future.

Share Purchase Plan: The company recently updated that it has completed its Share Purchase Plan which was carried out through the issue of ordinary shares and amount to a total capital raising of around $679 million. The company received a total of more than 53,000 applications under the SPP and expects to issue approximately 5.7 million fully paid ordinary shares at an issue price of A$120 per share.

Institutional Placement: In another step for capital raising, the company executed an institutional placement of a total amount of A$1.0 billion, conducted by bookbuild. The placement comprised of an issue of approximately 8.3 million fully paid ordinary shares for a consideration of A$120 per share.

Shareholding Update: The company recently announced that it ceased to be a substantial shareholder for CSR Limited and oOh!media Limited.

Key Highlights for the year ended 31 March 2019: In FY19, the group reported net operating income of A$12,754 million, up 17% on prior corresponding year. Net Profit for the year also went up by 17% in comparison to FY18, at A$2,982 million. Earnings per share reported a similar rise on previous corresponding period, at A$8.83.

Update for 1Q20 (period ended 30 June 2019): During the first quarter of FY20, MQG reported a group capital surplus of A$5.0 billion. Although the capital surplus was down in comparison to 4Q19âs surplus amount of A$6.1 billion, the groupâs capital position in the first quarter exceeded the Australian Prudential Regulation Authorityâs Basel III regulatory requirements. As at 30 June 2019, APRA Basel III Common Equity Tier 1 capital ratio of the group stood at 12.0%, up from a ratio of 11.4% as at 31 March 2019. APRA leverage ratio at the end of the period was reported at 5.4%. The group reported a liquidity coverage ratio of 166%.

Short-term Outlook: The company expects the financial results for FY20 to be slightly lower than FY19. The forecast was issued on the back various factors that will impact the performance in FY20, including market conditions, impact of foreign exchange, regulatory changes and tax uncertainties, geographic composition of income and completion of transactions & period end reviews.

As per another recent announcement, the bank updated that it has completed the sale of Count Financial Limited to CountPlus Limited, providing an indemnity of $200 million to CountPlus.

Home loan growth improved during the year with a volume growth of 4% on previous year. The bank reported growth in key focus areas including CBA proprietary lending and owner-occupied loans. The bank also reported strong growth in transaction deposits with a rise of 9% in balances and opening of 1.2 million new personal transaction accounts during the year. Overall, deposit growth for the year stood at 2%.

Funds and insurance income for the year reported a decline of 10.2% due to higher claims experience in General Insurance as a result of increased weather events. Trading income went down by 5.0% on account of lower market sales due to reduced client demand and unfavourable derivative valuation adjustments. 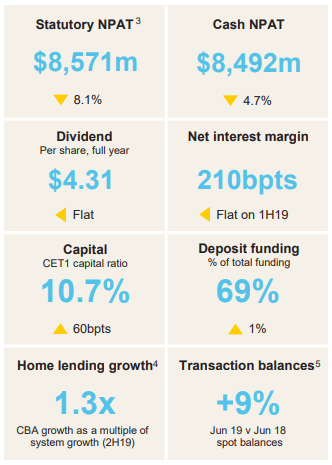 During the year, the bank reported a rise of 2.5% in operating expenses as a result of wage inflation and IT costs, increased customer remediation costs and elevated risk & compliance spend. Investment expenditure for the year increased by 9% due to increased spend on risk and compliance projects.

The bank recently notified on an increase in costs due to additional charges of $1,180 million after tax pertaining to customer-related remediation. In addition, costs are also expected to increase on account of change to the application of the software capitalisation policy. The above costs will in turn lead to a $1,123 million cut on cash earnings after tax for 2H19. Earnings from discontinued operations are expected to be reduced by around $57 million after tax.

New CEO & MD: In another recent update, the bank notified that Ross McEwan will assume the role of Group Chief Executive Officer and Managing Director from 02 December 2019.

Update for the third quarter of 2019 ended 30 June 2019: During the quarter ended 30 June 2019, the bank reported unaudited statutory net profit amounting to $1.70 billion. Unaudited cash earnings for the quarter stood at $1.65 billion, up 1.0% in comparison to prior corresponding quarter. Group Common Equity Tier 1 ratio was reported at 10.4%. During the quarter, Net Promoter Score for the priority segments stood at -14, depicting an improvement over previous quarterâs score of -17. 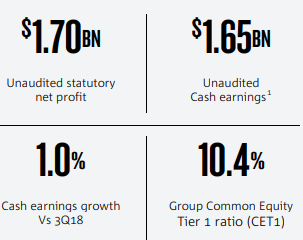 In comparison to 1H19 quarterly average, the bankâs revenue reported a rise of 1% on the back of growth in SME lending and a slight increase in group margin. Net interest margin for the period increased due to lower short-term wholesale funding costs. During the quarter, expenses remained flat due to the transformation program contributing to productivity savings which compensated for higher compliance and risk costs.

Overall, performance in the third quarter reported a decent improvement in comparison to the quarterly average of 1H19, with revenue increasing and costs remaining flat. The bank further simplified its platform for better customer outcomes with a reduction of 27% in over-the-counter transactions and 18% reduction in call centre volumes.

Tags:
ASX: NAB ASX: CBA Financial Sector Stocks
All pictures are copyright to their respective owner(s).Kalkinemedia.com does not claim ownership of any of the pictures displayed on this website unless stated otherwise. Some of the images used on this website are taken from the web and are believed to be in public domain. We have used reasonable efforts to accredit the source (public domain/CC0 status) to where it was found and indicated it below the image.