On 31 January 2020, the company released its quarterly report for the three months to 31 December 2019. Let us first go through the project details before diving deep into the steps taken by PRM during the last quarter.

The Company is the operator of and holds a 100% working interest in the Bowsprit Petroleum Leases (21754 & 21787) spreading over 1,154 acres, located ~70km southeast of New Orleans in ~3m of water. The lease area contains several historical fields, including an undeveloped oil field.

Initially, at the leases, PRM plans to drill a vertical well appraisal of prospective sands and development of a proven oil sand, and after confirmation of the resources with this well, the company believes that the Bowsprit structure can be developed with horizontal wells and produced either through a tie-back or a simple unmanned production platform.

The company has already selected a primary well location, with following goals: 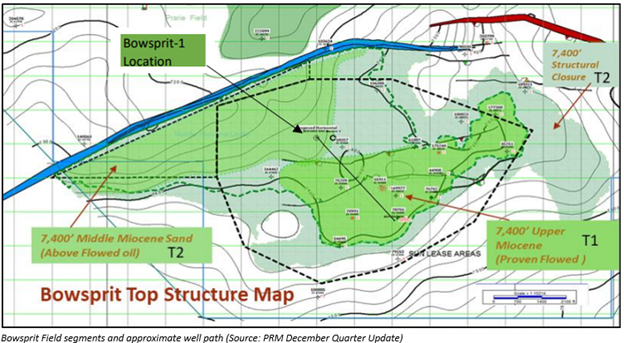 T1, T2 and T3 zones are the targets of the primary well, which is estimated to cost US$ 3.6 million. To know more about these zones’ objectives, please read here.

The Company plans to drill the first hole in the centre of the Bowsprit field, following which it intends to drill a horizontal section towards the south-east area of the field. PRM intends to flow test the horizontal well for a short period to prove a commercial flow rate, and to suspend the well as a future producer and subsequently tie back the well to a nearby production facility, provided the flow test results are satisfactory. 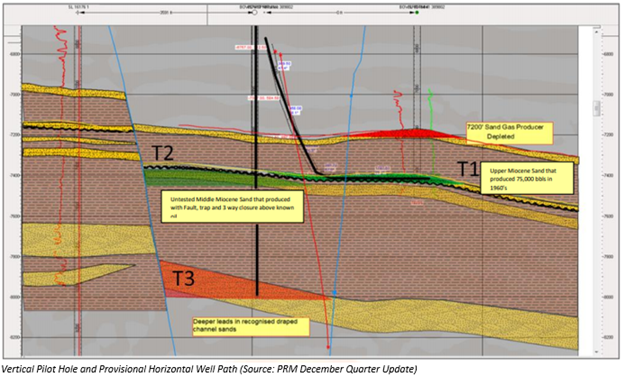 Securing All the Three Necessary Permits

FensterMaker, which is one of the leading independent environmental consultancy groups in Louisiana, worked on the permitting for the well. Consequently, the company obtained all the three permits required to drill the Bowsprit-1 well during the quarter.

Prominence Energy is in active discussions with several potential partners to execute farm-out deal/s, targeted towards securing funding for the drilling program. The Company has executed confidentiality agreements with several interested parties.

Moreover, the Company has appointed farm-out agents in Australia/Asia and the United States to advance these discussions. In early February 2020, PRM is due to meet various parties at the NAPE conference in Houston to advance the negotiations.

Meanwhile, the Company has set an offer deadline of 21 February 2020 for prospective parties, enabling meetings and subsequently follow up from the conference.

The Company entered into a convertible note arrangement for $ 250,000 with GTT Ventures and its two largest shareholders to meet its short term funds.

On 30 January 2020, the Company held its extraordinary general meeting (EGM), during which all the resolutions were passed.

Subject to securing funding and/or finalising farm-out discussions, the Company intends to drill the first Bowsprit well in the second quarter of 2020. Moreover, early production could be established in the third quarter of 2020, depending on the results of the appraisal well.

Bowsprit Oil Project is a low capital expenditure (CAPEX), high margin, oil appraisal / development project, and PRM believes that the project offers a strong chance of commercial production, enabling the company to return value to shareholders for their continued support.