Stocks of SoFi Technologies, Inc. (NASDAQ: SOFI) and Alibaba Group Holding Limited (NYSE: BABA) gained considerable investors’ attention on the first day of the trading week, rising by more than 3 percent and 5 percent, respectively, in the premarket session on Monday.

Let's look at some of the recent developments of the two stocks.

Also Read: Are you an ETF fan? Here’re five rising retail ETFs to explore in Q4

SoFi Technologies is a digital financial services company based in San Francisco, California. It offers loans, saving accounts, investment, and other related services.

The stock rallied after Morgan Stanley analysts gave an "overweight" rating, describing it as a 'powerful revenue growth story'. The bullish rating came after the company improved its market share in the consumer finance sector.

Also Read: Five oil and gas stocks under US$35 with over 370% YTD return 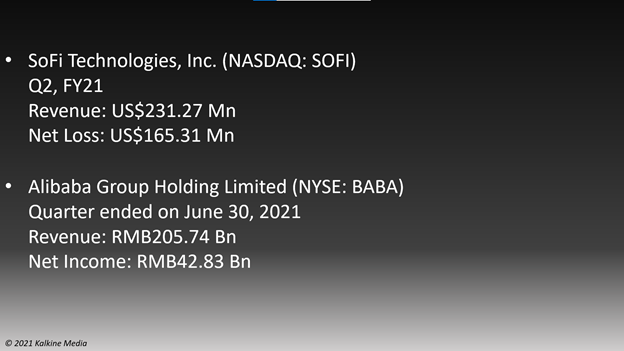 Alibaba Group is a Chinese technology giant with interests in e-commerce, retail, and other sectors. It is headquartered in Hangzhou, China.

BABA stock has been rallying after news of President Joe Biden and his Chinese counterpart Xi Jinping's likely meeting later this year. Other Chinese stocks also have been in the green territory after the news that came after China's Golden Week holidays.

Investors also expected an end to the Chinese crackdown on tech companies after the probe into Meituan concluded. BABA’s market cap is US$437.86 billion, the P/E ratio is 19.7, and the forward P/E one year is 20.29. Its EPS is US$8.20.

Alibaba’s revenue surged 34 percent YoY to RMB205.74 billion in the quarter ended June 30. Its net income was RMB42.83 billion against RMB46.43 billion in the prior year's same quarter.

Also Read: Is Affirm (AFRM) on course to become the next PayPal?

The technology sector, including fintech companies, has seen significant growth this year. The technology segment of the S&P 500 grew by 16.46 percent YTD, highlighting this remarkable growth story. Analysts expect the pace of growth to continue in the coming months. Investors, however, should analyze the companies carefully before investing in the stock market.