Is Pensando a public company? Know details ahead of AMD acquisition

Pensando Systems Inc., a technology company, will be acquired by AMD. In a statement on Monday, April 4, Advanced Micro Devices, Inc. (AMD) announced that it would acquire the chip making and cloud computing company.

Headquartered in California, the technology company was started in 2017. Its products are already used and deployed at scale with its enterprise customers, including Goldman Sachs, IBM Cloud, Microsoft Azure, and Oracle Cloud.

Pensando’s programmable packet processor, a part of its highly scalable distributed services platform, can be used to improve infrastructure services by offloading workload from CPUs and accelerating system performance overall.

In less than five years, Pensando has grown and built an ecosystem of partners and customers who have deployed more than 100,000 Pensando’s platforms into production.

Notably, Pensando is a private company. Since its inception, it has secured funding and has not revealed any information on whether it has any IPO plans.

If the acquisition happens, it would be worth watching if AMD takes it public in the future or continues to run it as a separate and private entity. 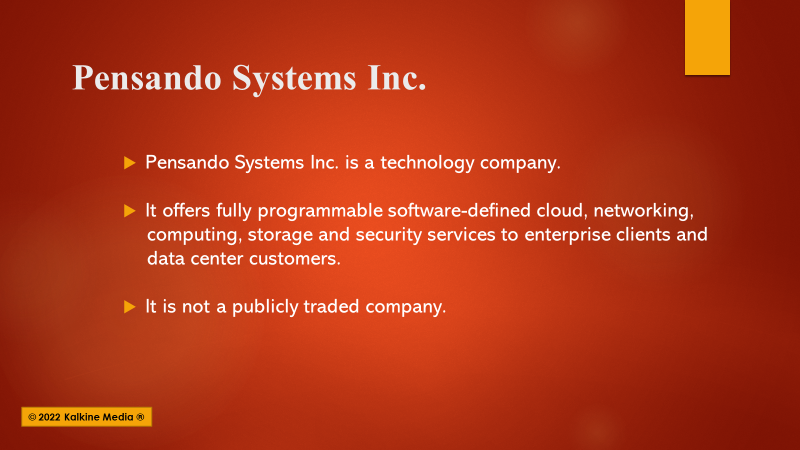 After the US$ 1.9 billion AMD acquisition deal, cloud service provider Pensando will continue building up its data center capabilities. AMD intends to capitalize on the ever-increasing enterprise demand for cloud-based services through data center products.

The deal value is excluding working capital, and other adjustments, said the company on Monday.

Pensando’s CEO, Prem Jain, and other employees will join Data Center Solutions Group in AMD after the acquisition. The deal is expected to close in the current quarter (Q2 2022), subject to regulatory approvals.

The semiconductor sales reportedly crossed US$500 billion in 2021, and some reports suggest that it is expected to reach US$1 trillion by 2030.

It is pertinent to keep in mind that the stock market is inherently volatile, and investors must apply due diligence before selecting a stock to invest.