Advanced Micro Devices is a semiconductor manufacturing company based in Santa Clara, California. It develops computer processors and other related products for clients.

Analysts had estimated EPS of US$0.67 per share on revenue of US$4.12 billion, according to Refinitiv data.

For the fourth quarter of fiscal 2021, AMD expects its revenue to increase by around 39% YoY to US$4.5 billion, plus or minus US$100 million. It also raised its full-year revenue forecast to about 65% YoY from the previous guidance of 60%. 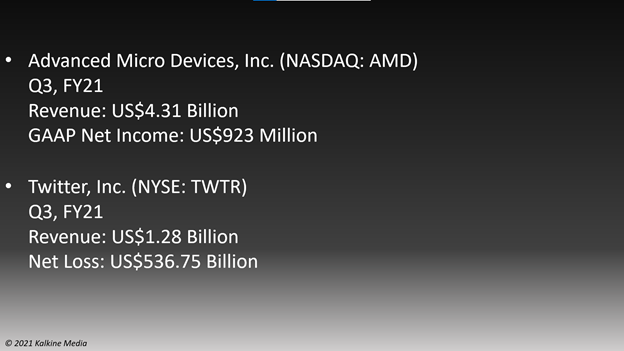 Twitter's monetizable daily active users were 211 million in Q3, FY21, while analysts estimated it to be 212.6 million, according to Refinitiv data.

Both the stocks saw considerable growth in recent months. The AMD stock rose 34.79% YTD, while TWTR stock rose by 12.75% YTD. However, investors should evaluate the companies and consider market volatility before investing in stocks.