BitTorrent (BTT) token rose 9.37% to US$0.002254 at 8:46 am ET on Tuesday after Binance became the latest crypto exchange to support its redenomination.

BitTorrent has redenominated its token into BTTOLD, the older version, and BTT, the new version. Several exchanges have supported its migration to BTT, the latest one being Binance.

Barring Binance, all other supporting exchanges will use BTT as the ticker following its re-listing. Binance, however, will use the symbol BTTC for the new token on Binance.com with BitTorrent’s approval. The move is only aimed at changing the ticker symbol for the token.

The company launched the mainnet with BTT redenomination in December 2021. Users were advised to swap their old BTT tokens with the new ones. The redenomination will not affect the token’s market capitalization, but the supply will increase.

The new token has more use cases than the old one, such as becoming a validator on the BTTC network, paying for gas fees as a native token of BTTC, participating in the governance of the BTTC community, and staking on BTTC to gain rewards. 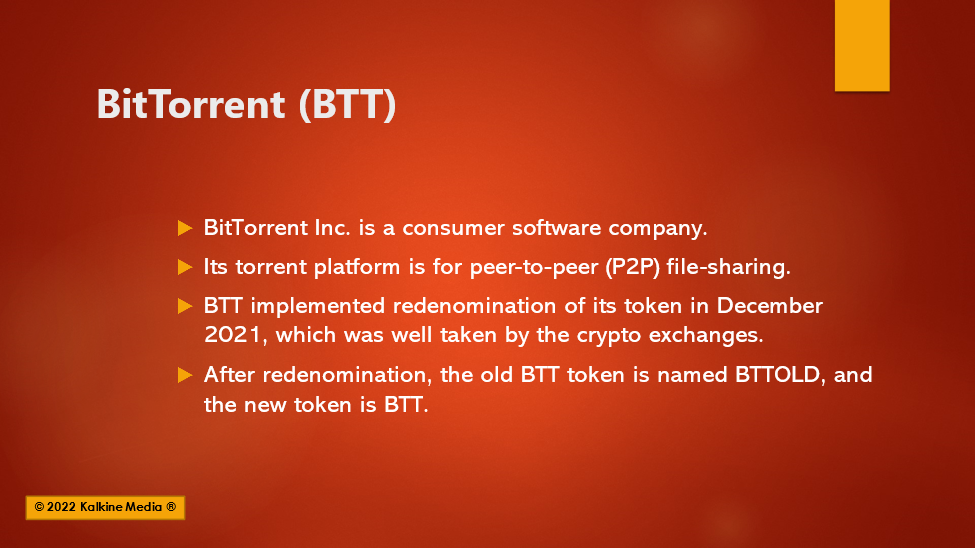 BitTorrent redenominated the token to boost its supply, which had been limited before the redenomination. BitTorrent has 990 billion tokens in supply, with an average of 11,000 tokens per active user and fewer than 500 tokens per client, it said in a blogpost.

However, more and more exchanges are coming on board to support its redenomination. Binance became the latest exchange to support the new token, BitTorrent said in a tweet.

What Is BitTorrent (BTT)?

BitTorrent was launched in 2001. The blockchain platform TRON had purchased it in 2018. TRON launched the token on its blockchain with the TRC-10 standard in 2019.

The crypto market has been volatile of late. It was up 8.14% to US$1.66 trillion at 9:53 am ET on Tuesday after consecutive days of decline.